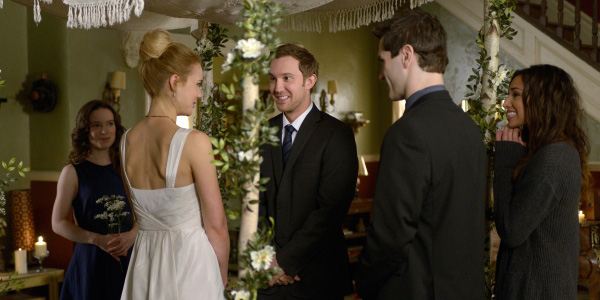 This week’s Being Human brought the main three back together to face a threat in the monster house. Is there bond still strong enough to get them through the problem?

All season’s the story lines have been crossing but Aidan, Sally, and Josh have not had to deal with the same problem at the same time until tonight. With the wolf wedding about to happen, Sally falling apart, and Kenny turning in the basement there is a lot going on in the monster house. Sally’s body is decomposing, passing the point of hunger and about to die she finds out she is not the same Sally who died a few years ago. Her boys and Nora rally around her, sitting by her until the end.

Before the final minutes though Nora comes in and saves Sally some depression in the after life, and bringing in a whole new wardrobe for the future ghost to pick an outfit for eternity. With her outfit picked out and not having any hold ups like her last death Sally finally gave in and passed away. As her last breath left her body she appeared on the other side of the room visible to only Aidan and Nora, Josh has not changed yet, and was ready to face Donna. Aidan deiced to bring a little insurance with him, tearing Sally’s heart out of her body. Now armed with her friends, a spell, and her heart they were ready to take on Donna.

The trio were transported by Donna’s door to a limbo like place that resembled the soup kitchen. When they arrived the were greeted by Ray, a shell of what the wolf used to be, but dangerous nonetheless. Josh sends Sally and Aidan along to find Donna while he deals with Ray and wolfed out Ray. Sally and Aidan find Donna cooking waiting for Sally’s soul. They put up a good fight but it is over quickly with Sally’s ghost consumed by flames and dissipated by Donna’s cleaver. Sally’s soul is taken in by the witch, but Donna begins to glow from the inside out and a powerful explosion sends the trio back to the monster house. It appears Sally’s soul and the bond share by the ghost, the wolf, and vampire were enough to defeat the witch, for now.

With the three home, the wolves wed surrounded by friends, and they all live happily ever after, maybe. The last shots of the episode show a mutated vampire Kenny, and Liam now with only one eye showing up at the honeymoon cabin. Looks like there is still a lot of action left for the season finale.