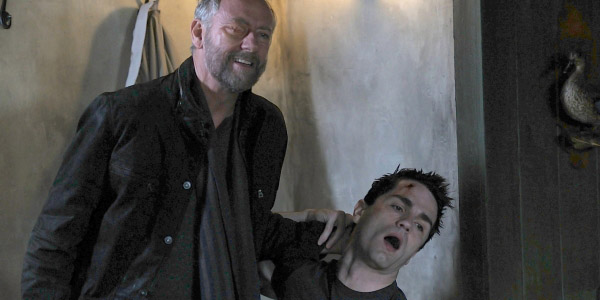 There is a lot going on in the monster house as we enter the last episode of Season 3 of Syfy’s Being Human.The wolves are off on their honeymoon, Aidan is having fun with Kat, and Sally is readjusting to being a ghost again as we start the season finale. As the show unfolds everything falls apart for the monsters.

Kat wakes up alone in the living room and finds a dead Sally in the bedroom, and freaks out. Aidan’s life is too much for his new love and she leaves the house screaming. While Aidan and Sally are dealing with the fall out and trying to comfort Kenny, Josh and Nora are discovering what happens to Vampires after the virus. They are taken by Liam and forced to kill the new deformed vampires or die.

Liam heads back to the monster house to confront Aidan, but is killed in the fight insuring that Josh will be a wolf forever. With all the monsters accepting of their new paths in life they all try to adjust. Aidan takes on the role of leader asking for help from Blake to wipe Kat’s mind of the monster house, Josh and Nora prepare for a night in the woods, and Sally is settling into being a ghost again. Aidan also has to deal with Kenny, which sparks a memory of his time as a colonist. He flashes back on the reaction of the town to his return, and watches his wife die, drowned as a witch. He looks at Kenny and his need to be a father out weights his need to be responsible and lets Kenny go.

The season ends with a woman who looks like Aidan’s wife arriving in Boston, Josh stuck in wolf form during the day, and Donna taking Sally into a dark hole. It looks like our monsters are in trouble, and January can’t come fast enough.