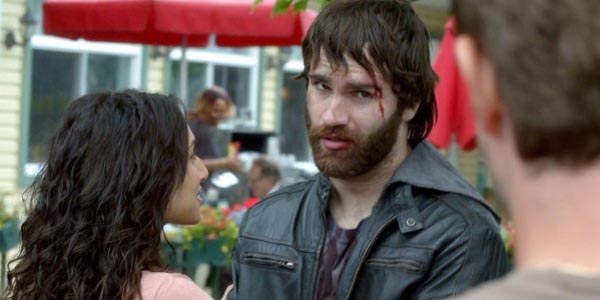 Another night in Boston with the monstrous trio leads to more questions in the newest episode of SyFy’s Being Human.

This episode fills in some blanks on the fifteen months science we have seen our monsters. The audience is caught up on their goings-on in this episode, through Aidan’s hungry tired eyes. We learn a little more about the virus and how the wolves have take over Boston, leaving the remaining vampires feeding on baby blood. While Aidan is trying to get some “food” he is jumped by a pack and save by his “son” Henry. Henry seems to be doing well for himself during the plague, but as Aidan pulls back the curtain on the happy vampire he see that Henry’s survival has been all due to keeping a woman captive who was never infected with the flu that lead to the vampire plague. Aidan does some sole searching and frees Henry’s girlfriend only to once again push away his offspring.

On the other side of town Josh is taking Sally out for her first night out on the town. They are going it alone because of the full moon, leaving Nora in her kennel. While out Sally enjoys being able to eat and talk to people, and ends up running into an old friend. Josh tries to lead her away, but in the end a new body full of hormones win out. Sally falls over this guy but in the end they kiss good night and Sally sleeps off her night out.

With Aidan out looking for food and Sally socializing Josh is left alone to wander Boston on this full moon, something he has not done since he was bitten years ago. He takes in the night and realizes that even with Nora being cursed he wants to live his life with her and decides its time to propose. While he is doing all the soul searching Nora is visited by Brin’s pure blood father looking to find out what happened to his son.

The episode ends with Nora missing and a little flirting between Sally and Aidan, leaving fans to wonder what will happen next to the trio.