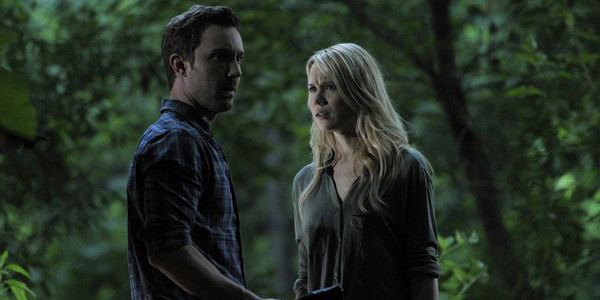 From one wolf back up to two, ghosts have someone new to fear, and a vampire succumbs to the thirst all in this week’s Being Human.

This week features another time jump, the episode starts right after the full moon in the last episode and jumps ahead three weeks right before the next moon. In those weeks Aidan has been trying to find clean blood with Henry, Josh has been trying to keep the home together and Sally has been guilt eating over the loss of her old friend.

Aidan has one of the biggest revelations in the episode realizing that even though he will live forever, he may be doomed to be alone for all of time. After weeks of trying to find clean blood Henry slips and eats, exposing himself to the virus and insuring his demise. Henry points out that all those that love Aidan end up losing their lives, be it human or immortal. Henry’s loss eventual death this season could push Aidan to retreat or repopulate Boston, both having negative effects on his relationship with Josh.

Sally also finds out that there is a reason she can not visit people from her past, it will kill them. Her guilt is causing some binge eating and she tries to set things right but ends up making it worse. After helping Trent free his spirt his door appears, but instead of leading him into his next phase of the after life Trent is sent to the witch in the soup kitchen. Apparently she has a meat cleaver that turns ghosts into an edible power that turns her young. How many more souls will Sally send her this year?

Finally the wolf pack is gaining number with a new “teen wolf”. A young run away was scratched by a wolf during the last full moon, and Josh finds her in the ER right before the next moon. Nora and Josh decide to take her under their wing to help her through the change, but she is unlike Josh and Nora. Her age and background may make her and even more dangerous wolf than we have seen in the show.