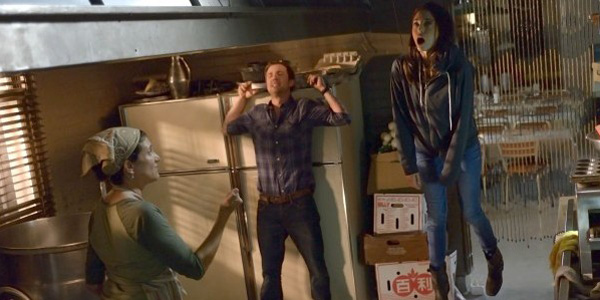 It’s a busy time at the monster house this week. Losing souls, and origin story, and teen wolf drama are all part of this week’s Being Human.

Last we left our monster house residents Sally was happy with Max, Josh got rid of Liam and got back Erin, and Aidan had a clean blood supply, but all that changes and rather quickly.

Sally is enjoying her time with Max and being alive again until a knock at the door threatens to destroy it all. Sally’s brother comes to take over the landlord role of the house, but if he bumps into his sister while snaking the drain he may be looking for his own door. Sally has no choice but to ask the witch for help, which comes at a big cost. In exchange for her brother’s life and all those she cares about Sally has to give up her soul. The witch will get Sally’s soul when she dies, but who is to say how long a Zombie really lives?

Aidan gives us a glimpse of what is was like to be turned at the hands of Bishop, when Kenny asks to be turned. Kenny has lived in the bubble too long, so when a vampire comes into his life he sees his ticket out. This triggers Aidan memories of his first days as one of the undead, and it is not pretty. Trying to protect his fellow soldiers of the American Revolution leads him right into Bishop’s waiting arms. Kenny questions Aidan about the life of vampire, and tells Aidan he is done being bubble boy and asks to be turned or he will leave his bubble. Aidan has a hard choice does he bring another vampire into this poisoned world or does he let his only food supply die?

Josh is dealing with living with a teen girl, and it is not going well. While everyone is telling him to take it easy and just go with it, he feels like something is wrong, and he is right. Liam may have appeared to back off but bringing back Erin was part one of his plan to get Aidan, part two was using Erin to spy on Aidan and report back. Liam used Erin to poison Aidan by adding her own blood to his supply of food. It looks like the little wolf cub is could get her first vampire kill next week.

Will Aidan and Erin survive their first fight? Will Sally start to decay? Is this all leading to Josh being the family pet again to protect his pack? Next week should be full of action at the monster house.