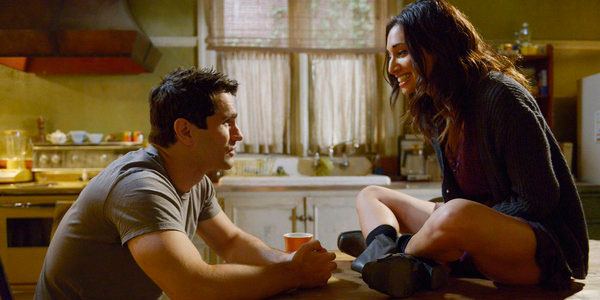 The monsters are back and they are a mess. Aidan and Nora are living out in the woods with a wolfed out Josh, and Sally has been living in spa limbo for the last three months, leaving the monster house empty. So Can the gang get back to normal at the monster house find out in the season 4 premiere of Being Human?

The episode picks up about 3 months after the events of the season 3 finale, and they are all a mess.

Sally is living in a kind of limbo with Donna. Donna fills us in on what has been going on with our favorite ghost, Sally. It turns out that Donna is actually afraid of what Sally is capable of, and drags her into a kind of limbo. The only way Sally can deal with it all is to create a calming place. The two are getting rubbed down in a limbo day spa, until Sally freaks out and traps Donna. Sally is no fool and is able to figure out since they went into limbo through her death spot, she could escape through Donna’s. She enters a swirling vortex of blood in the spa, and emerges in a Save-Mart at the end of noose. She sees a little of Donna’s past before she runs out to find her friends.

Meanwhile Aidan is taking Josh out for his morning run as Nora follows with a tranquilizer gun. The two re-cage Josh before they go off to do chores for the day. They are living in a camper out in the woods on an abandoned farm, trading off shifts at the hospital and spending every minute they can to keep Josh safe. When the moon is full Nora prepares to change and see Josh for about 30 minutes. The new curse on him leaves them with about 30 minutes before the moon is up and after it goes down to reconnect before they are opposites again. The new schedule is taking its toll on the couple, making the human Josh question his life. He begs Aidan to end his miserable existence to free Nora of the burden, but Aidan talks him down.

Speaking of Aidan his life, other than wolf sitting, is going well. Kat is falling more in love with him by the minute, and the virus has been cured. We know though when all is good something has to go wrong, and that something is the return of his wife Suzanna. She approaches Kat at a party, but leaves before Aidan comes back. She finally shows up at the end of the show, but we will have to wait until next week to find out how she is still alive.

The show ends with some big reveals setting up some mysterious things for the season. Sally find Aidan and he brings her to the camp site, only to find Josh has escaped. When they find him Aidan has to make a choice take him down or risk him hurting someone else, however Sally steps in with a new power trapping the wolf in a cage of fire. Nora tranquilizes him, but Sally disappears. Sally is transported to a room where witches are sacrificing a little girl, but she can’t stop them. The final reveal of the night is the fate of Kenny, Aidan’s newest son. It turns out the virus ran it course leaving him looking normal. He is also following in his father’s footsteps, reopening the funeral home, with Blake at his side. She appears afraid of him, making me wonder just what did that virus do to the new vampires.

It is shaping up to be one hell of a season in the monster house, are you ready for the ride?