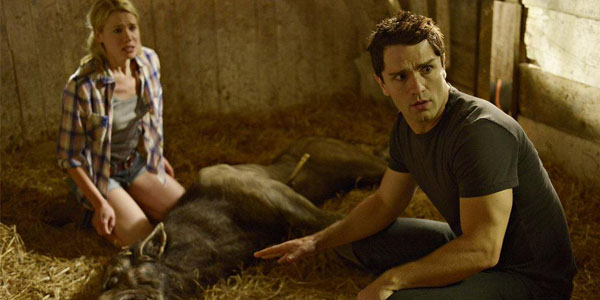 Like the 80’s ? Well this week’s this week Being Human is full of 80’s nods as well as filling us in on the rebirth of Aidan’s wife Suzanna.

Sally is on an interesting journey this season. She is no longer a zombie, and now seems to be more than a ghost. She heads to the mission where we first met Donna last year, and although it’s nothing more than an empty lot Sally is able to see the building that it used to be. She is able to dig out of the rubble a book, Donna’s spell book. She starts to look for a way to help Josh, and is also thrilled to be able to touch something other than her own cloths. She talks Aidan and Nora into letting her try to free Josh with a spell, but something goes wrong. In a kiddie pool and using some of Nora’s blood she summons a dagger, which has to be plunged into Josh’s heart. When they finally do it, it looks like the wolf is dead and Sally disappears again. Sally reappears in a new place again, this time it is the past. She is watching the guys first days in the house, but she is unable to interact with them at all. She sees herself hiding from the guys, it is a very Back to the Future moment. While Sally is gone Nora and Aidan are afraid they lost Josh,until human hand comes out of it’s mouth. It is a very Tauntaun moment when they cut Josh out of the wolf, but throughout the episode he seems off. He is quiet and just not the Josh we are used to seeing.

While Josh is settling back into his human life, Aidan has a lot to deal with in his love life. Suzanna fills him in on her rebirth, and why she has stayed away all these years. It turns out that Bishop fished her out of the river, and turned her for Aidan. She struggled with the hunger, and refused to do what Aidan was forced to, to survive. She held out as long as she could until the hunger took over, feeding on a young boy running through the woods. When she was able to see straight again, Bishop appeared and she looked down to see she had killed her own son. Unable to deal with the pain, and not wanting it to impact Aidan’s life she left. Although she told Aidan that it was Bishop who told her to leave, and their son died a grandfather. She seems tortured by her choices, so much so that when alone she whips herself to deal with the pain.

As the show ends Sally returns to find Josh at home, but freaks out because she did not complete the spell. She is worried using magic may not have brought Josh home completely and as the credits start to roll Joshes eyes start to glow. Could there be a new kind of wolf in the monster house this season?