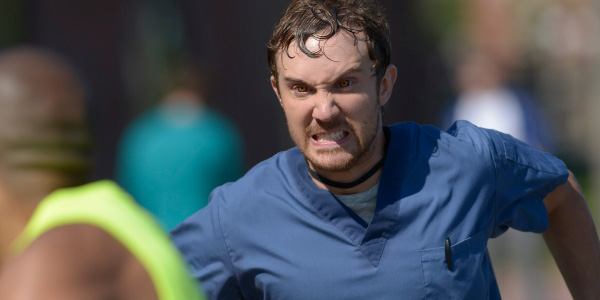 The Monsters have a lot to deal with this week in the Monster House. Aidan has a meeting with the leader of Boston, Josh is have some Teen Wolf issues, and Sally’s powers are escalating. All this and a surprise killer in this week’s Being Human.

Our three monsters have a lot to deal with this week, and their stories cross a good deal throughout the show.

Sally is dealing with her new powers and as she learns more about the book she finds a spell for finding her door. All good sense goes out the window and before she loses the spell she casts it, but instead of her door appearing Donna pops into the monster house. The two are connected, and she tries to take Sally away, but Sally is able to burn her back to limbo, and in the process burns the book. She starts to feel weird and realized the book is not gone, it is now part of her, and she is able to recall anything within the book at any time. Sally is able to heal Nora’s scars but in the process she is sent back in time and sees the little girl again, this time alive and well. Is Sally there to save her to free her from the monster house or is there something deeper going on?

Josh is dealing with the wolf, who is not living right below the surface. He goes back to work but smells, sounds, and his sense of touch are all on overload. He can’t keep them in check and starts to unravel. He almost attacks a runner and some of the hospital staff, making him wonder what he is turning into next. His new form finally comes out when he is attacked by some vampires. He “wolfs out” on them, looking like something from Teen Wolf ( the 80’s not modern) and seems to be something new. Josh is afraid of this new powers, and has to learn how to control it, before it controls him.

Aidan got Josh back to work but gets abducted by some vampires working for Kenny.  Aidan is shocked to see his son as the head of Boston. And as the episode progresses he learns how twisted Kenny has become both inside and out. Aidan was right to hesitate to turn Kenny, even though he was 18, he was stuck inside that bubble, having no real chance to mature. Kenny is jealous of Josh, and sends some vampires to kill him, showing just how out of control he really can be as a vampire. Aidan also learns that Kenny has a new power, this new breed of vampires can not only compel humans, but also vampires. Kenny shows Aidan that his disfigurement is still there, but hiding it comes at a cost. It take a lot of energy which means he has to feed much more than that average vampire. To help his new feeding needs he opened a new blood den, but it’s opening night is cut short by a hooded figure. Aidan and Kenny check the security cams to leaner it was Aidan’s ex, Suzanna. Can her quest to wipe out vampires lead her to Aidan?