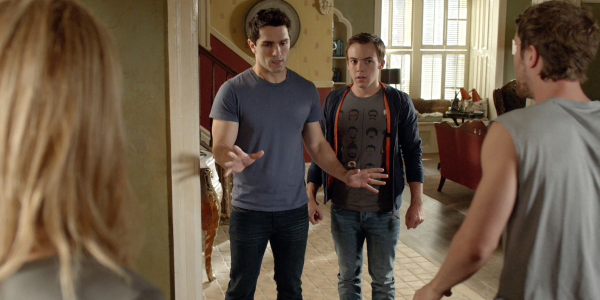 This week in the monster house a baby is born and Aidan has to make a choice his old life with Suzanna or his new one with Kat. All this and Sally goes on a hunt for the Lil’ Smokie on this week’s Being Human.

This week Aidan has to help Kenny figure out who attacked the blood den, but without tipping his hand about Suzanna. While trying to figure it out he has to break the news to Josh and Nora that Kenny is still alive, news Josh is not happy to hear. It does not go well but Nora is able to let the past be the past, Josh has to run it off. Aidan also has to deal with Kat, who is looking to make things a little more serious, trying to plan a get away for the new couple. Aidan is conflicted choose his old life or his new one, and in the end he picks Kat. He tries to reason with Suzanna, but is unable to convince her to stop her killing streak. He tells Kenny where to find her, but leaves out the personal connection, which will surely come up later in the season.

Sally popping in and out of her roommates issues is on a quest of her own, trying to track down the little girl from the monster house, who she starts calling Lil’ Smokie. She turns to the only person she knows, who is not dealing with a crisis, Zoe. The last time they saw each other was about the time Nick was trying to eat Zoe, not a good time for either of them. The duo are able to track down the former owners of the house, and it appears the little girl has grown up with a family of her own. Sally gets Zoe to question the grown up Lil’ Smokie, but is not convinced by her answers. They two leave the house and see a rather creepy daughter in the top floor of house.

Finally Josh stopped dealing with his own problems to help another wolf in town. While out for a run he catches the scent of a scare werewolf named Caroline. She has a story that sounds a lot like Josh’s, she and her husband Andrew were out camping when they were attacked. They survived the attack but now turn every month on the full moon, but there is a complication she is pregnant. Josh gets Nora to do an ultrasound on the Caroline, and find that the baby looks very wolf like in the womb. Andrew starts to panic and leaves with his wife. When Caroline starts to go into labor though Andrew ends up bringing her to the monster house looking for help again. Nora is able to deliver the baby who comes out more wolf than human, until it is fed and turns to a normal baby. The episode ends with Aidan choosing Kat over Suzanna, and starting to tell her the truth about who he really is and what he can do.

The story lines, while still mixing, are starting to build and drift. So far this year it does not seem to be taking away from the core of the show. It will be interesting to see the fallout of the reveals this week, and some of the lies Aidan has been telling around town.

Finally catch a glimpse at next week’s all new episode.