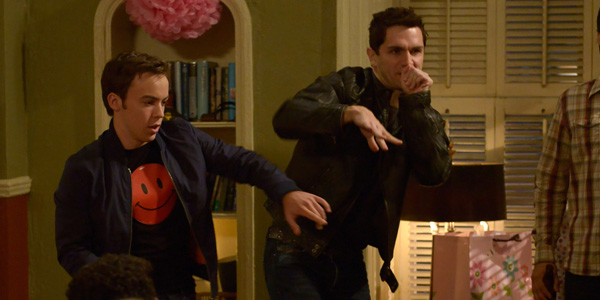 It’s a werewolf dance party and baby shower on Syfy’s Being Human this week.  What could go wrong?

There were a lot of memorable moments in this episode, and you can tell some of it came from the actors. A lot of the outtakes on the DVD’s are the cast singing and dancing, and there is a good deal of that in this week’s show. It was nice to see them have a little fun considering all the heavy issues they have had to deal with this season.

This week picks up right were the last one ended, Aidan telling Kat all about his past. The first few minutes were of the couple dealing with the news, ending with Kat asking Aidan to leave for good. It turns out honestly is not the best policy when it comes to monsters.

Back in the wolf world Josh and Nora were visiting with the new wolves only to find out they were caught off guard by the baby, and are not ready to be parents. Josh and Nora decided to throw a baby shower for the new wolves, but instead of a small gathering it turned into a real party. To complicate matters even more Josh’s sister Emily, fresh out of rehab, shows up to crash at the monster house. To keep the peace Aidan heads out to get his mind off of Kat, and runs into Kenny, who offers him a ear and some fresh blood.

Meanwhile back at the monster house the party gets bigger, and  one of the new wolves starts to show his alpha nature, calling for a stronger pack and an end to the vampires. The the middle of the speech Aidan comes home a little tipsy with Kenny, the room went silent and the wolves catch the scent of vampire. It seemed like it was all going to go to hell until Aidan broke the tension with some beat-boxing. The wolves and vampires got a long ok, until Emily started to struggle with all the alcohol in the house, and Sally tried to reach out to her, using magic to get her attention. Once again her magic backfired, and instead of helping she gave Emily the ability see what was hidden showing Kenny’s true face. It turned the wolves into protection mode, and went from party to an all out vampire werewolf fight. Josh was able to calm things down, but the damage was done, and it looks like our wolves might have to pick a side before the season is over.

While the rumble is going down at the party Sally is transported to Aidan’s past, getting a look at his life in the 1920’s with Henry. It was shocking to see Aidan killing for fun with his first son, and made her realize under all the pain and loneliness of modern Aidan is truly a monster.

The show ended with Aidan walking away from Kat, Josh and Nora hanging with the new pack, and Sally dealing with all the new powers and consequences. Can it get worse? I’m sure our monsters will have a lot more to deal with, considering this is not even the half way point in the season.