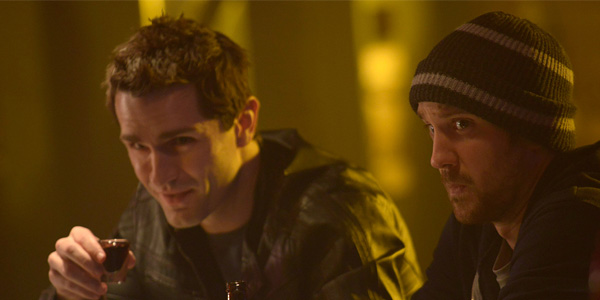 There are some heavy issues going on in the monster house this week. One couple is on the rocks while another is giving it another go. And on top of all the couples drama we get another ghost in the house, so check out what happened on Syfy’s Being Human.

The first change with the new pack was difficult with Josh and Nora. It turns out Josh’s wolf got a little frisky with another female wolf. Josh has been telling Nora he has had more control, but it looks like he was fooling everyone including himself. He spends most the hour wrestling with telling her to keeping it from her, but in the end it was the other wolf’s husband that broke the secret. Nora was shocked, and unable to deal with this new Josh. When the other wolves came into the house and attacked, Josh lost it and wolf’ed out in front of everyone, showing Nora the new side to him. It’s a shame that after all the progress they have made that Nora is willing to push him away.

Aidan is also dealing with relationships,  not with Kat but with Suzanna. After his bender with Kenny, he is craving blood even more, and on his way to find fresh food Suzanna shows up and stops him from feeding. She talks him down and takes him to her night job, a bar. She gives him just enough blood to curb the craving, and after closing the two share a very intimate moment that was more human and monster. At day break they leave the bar, making a pact he won’t feed if she won’t kill. As the episode ends we see Suzanna leaving a vampire in a alley to feed, but Aidan with a dead girl. Will Suzanna take out her former husband, or will she help him through it all?

Finally we get a new ghost, and it happens to be another of the Malik family. Robby returns this week and tells out monsters he will be selling the house to help the family let go with what happened to Sally. As he fixes up the house Sally spends a lot of energy to scare away the potential buyers. She uses magic, and is transported back to her first week in the house with Danny. She gets to see Robby sticking up for her trying to protect her from Danny, but all of it falls on deaf ears. When she comes back home to the present she see’s Robby, who can now see her because he is a ghost. It seems that while fixing the house he was elected to death. The whole scene looked like something out of Final Destination, making me think it was Donna from the other side to try to get Sally back again.

Will Donna be back in the monster house? Can Josh hold on to Nora and the wolf? And will Aidan be Suzanna’s next victim? Find out next week on Being Human.