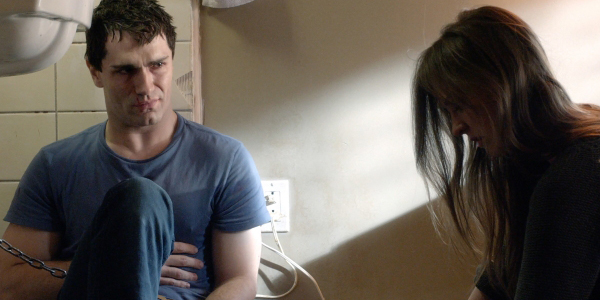 Robbie is dead and Donna might be his only way back to the land of the living. Can the monsters save him and not lose one of their own? Find out this week on Syfy’s Being Human.

Another week in the monster house and we have a new monster. Sally’s bother Robbie was killed in a rather strange accident, and now the roommates have to find a way to deal with the new Malik ghost in the house.

Sally is determined to return him to the land of the living, while the rest are not sure it is a good idea. Sally’s only option is to find Donna, and see if the witch can help her. She heads back to her death spot in the Shop-Mart and is able to pull her back into the real world. Donna for the first time talks to Sally like a mentor, but something seems off. As they talk the duo is thrown into the past and Sally witnesses Donna’s death and resurrection. It gives Sally and idea on how to bring back Robbie, but is unwilling to sacrifice another soul for her brother. Donna selflessly offers her should but when time comes to preform the spell, Robbie takes off, or at least that is what Donna tells Sally. Without her brother Donna asks to be be sealed off from the real world, Sally does so and is sent back to her past this time, the night she dies.

While Sally is trying to deal with her brother, Aidan heads to Suzanna to try to come down off his live blood high. She can tell he is still high from the last feeling and drugs him, when he wakes up he is chained to a sink and she is watching him with wooden stake. She tries to detox him, but the killer in Aidan comes out. She tries to get him to repent for all his wrong doings to remember all his kills, and he goes off naming all them laughing and smiling the whole time. Finally when he is back to level, and hitting his bottom, she breaks the news that her first and one of her last live feeds was their son. Aidan lets out a wail and almost kills her, but the two hold each other finally morning the loss of their boy 200 years ago.

The Wolves have their own drama to deal with, but don’t get a lot of screen time tonight. Nora is on the verge of leaving, and when the Josh’s wolf comes out in a very intimate moment, that is it.

Tonight’s show was one of the best of the season if not the series. Sam Witwer deliver one of his best and most emotional moments tonight, bringing to life the pain of Aidan through his 200 years as a vampire. The show ends with Aidan and Suzanna starting to heal, Josh and Nora breaking up, and Sally trying to stop her own death. If she does stop it how will it impact the monster house?