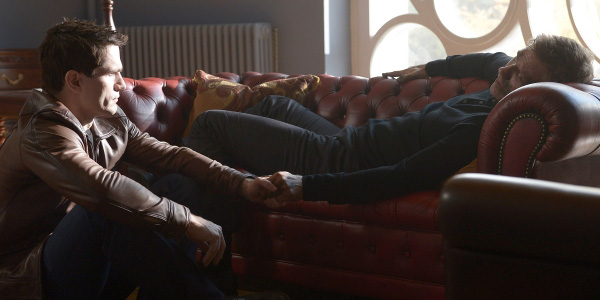 On this week’s Being Human the monster house is falling a part without a live Sally to hold it together. Can the trio come back together in time to save themselves?

Whenever a character goes back in time, no matter their intentions, it always goes wrong. After Sally saved her past self she tried to get the gang together, but without the struggles of the past four years they were not the same. After Ray killed Sally outside the blood den, Bishop showed up to clean up the mess. Distraught from his loss Aidan went on a hunt for the wolves responsible, finding Josh and Ray in a factory. Aidan quickly killed Ray, but stopped Bishop from killing Josh. Aidan knew living with the guilt would be worse than death for his former roommate.

The show jumps ahead with Aidan and Bishop are back to running Boston, using Nora to get clean blood from the Hospital. It turns out something happened to Nora, turning her into an addict, allowing Aidan to use her secret to control her. Meanwhile out in the suburbs Josh is running a pie shop with Sally keeping him company. Sally has been trying to get him to find Donna to fix everything, but he is content to live his little life alone. Sally takes possession of him to get some help finding Donna, but it does not work and she leaves some of the old time line memories in his head. It helps a little to motivate him to get the timeline right, but not enough. The push that Josh needed came from an infected vampire looking for a meal, reminding Sally that there is a blood virus out there and Josh has the cure.

The duo returns to Boston to save their former friend, but in the process elevates him to become the king of Boston. Aidan used Josh’s blood to immunize himself, and fed Bishop tainted blood, but guilt and reality set in and he returned to help his friends. Sally is able to find and get Donna to help the trio, but there is a price Sally may over shoot and miss her real time. The spell is like a bungee cord sending her a bit further then snapping her back to the regular present. The spell works but she sees a future where Aidan snaps Josh’s neck for something.

Will this really happen or will the monsters live happily ever after?