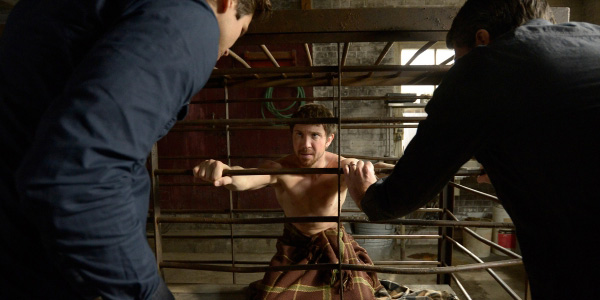 Sally is back the Josh has a new pack. Does it mean everything is going well for the roommates in the monster house? Not even close find out what happens on an all new Being Human.

Sally returns to the present, and is ready to make sure the future that she got a glimpse of never happens. She has a problem, after living in the past with Aidan as her better half, she now has to live with him as just friends. She is struggling with knowing him so well but not being able to tell him anything.

Josh on the other hand has a new pack, one that is accepting making him their leader. What he does not know is they have plans for his new kind of wolf. They want to make him change before the full moon to create new wolves. Mark and crew are worried that the truce with the vampires will not last and they need the numbers to make sure they come out on top. They trap Josh in a cage, shocking him with a cattle prod to bring out the wolf, making a new bunch of wolves before the normal change.

Aidan is off on his own dealing with Suzanna, having slipped up last week he now has to help her kill some of their own kind. Her plan is to take out the leader, and watch the rest fall, but the leader is Aidan’s newest son. Aidan struggles with keeping a promise to the one he loves, and his own blood. She traps him and Kenny offering a choice kill the new king of Boston or die himself. He does the only thing he can and stakes his own wife saving his new son.

As all the stories diverge by the end of the episode they come back together. Kenny’s wolf girlfriend tells Nora that Josh is trapped, and the roommates rush to his aid. Sally scopes out the house, making sure the coast is clear before Aidan and Nora go into free Josh. When they get there they are able to open the cage, but the wolves return blocking their escape. Aidan and Sally stay behind to cover our wolves escape, and give us one of the most entertaining and disturbing fights in the history of the show. Sally jumps in and out of the wolves bodies giving Aidan the edge he needs to take them all down. Before the fight is over Sally uses one of the bodies to kiss Aidan and remind him of their connection, giving us a rather disturbing kiss, but at the same time one we know is right.

All return to the monster house to rest up. Josh is coming down off his last outing with Nora watching over and Aidan trying to wake a sleeping Sally. We end with Sally being transported into Lil Smokie’s death room, which has been in the house the whole time.

Need to catch up on Being Human? Head over to Amazon to get past seasons on DVD and Blu-ray.