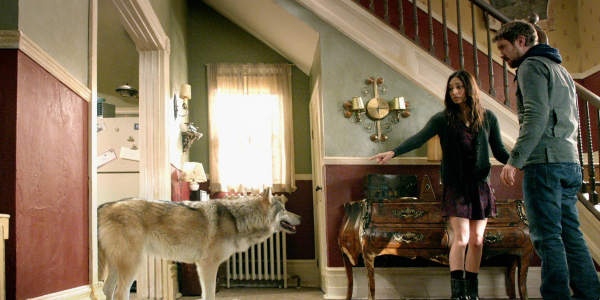 This week on Syfy’s Being Human the monsters are recovering and discovering they are not alone in the monster house.

Our monsters are dealing with a lot right now, and things look like they will get worse before they get better. While sorting out the events of last week Sally and the others discover another room in the house. The room housed another ghost, the girl from Sally’s visions, and by breaking through the wall they released her. The roommates find out her name is Ramona and is the twin of the woman Sally went to visit, and has been listening the whole time she has been in the house. They also notice a few tally marks in the floor in blood, but before they can figure it out they are interrupted.

Just as they start to learn about the little girl a visitor comes with bad news for the roommates. It turns out Sally’s dad sold the house, and is unwilling to give them anymore time. So not only do they have to deal with all their issues but pack their lives in a week. Sally and Aidan try to talk to the little ghost sister, while Josh and Nora deal with their issues. The pack comes to confront Josh to get him to finish turning the rest of their new recruits, but when they threaten Nora he loses control. He eats them all tearing the entire pack to pieces.

The roommates are all scared but Sally has a plan, because she has some wolf exprecne she posses Josh right before the change. She is able to talk to the real Josh, and help him come to grips with who he is inside. Sally finds out Josh has been hiding for months in his own mind and it has really been the wolf out in the world, that is why it has been so easy to “wolf out”. They talk the wolf down, bringing Josh backhand in control of his body. When he comes back to the real world, Nora is there relieved to see her husband.

Aidan cleaned up the wolves with the help of Kenny, hiding the fact that his girlfriend was at the massacre, but her ghost visits Kenny, telling him what happened.

The show ends with some new tally marks in the blood in Ramona’s room, making it look like she is more than just a spirt in the attic.

Need to catch up on Being Human? Head over to Amazon to get past seasons on DVD and Blu-ray.