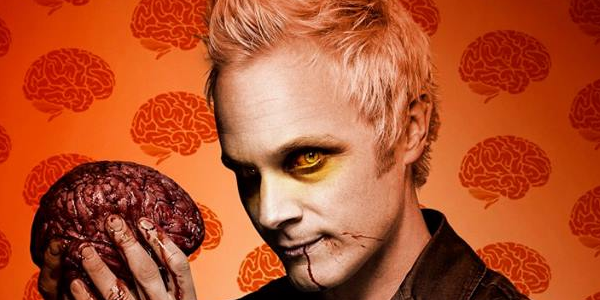 “He Blinded Me…with Science” switches gears to a much more interesting story in the middle of the second act.

The thing that bothers me about “He Blinded Me…with Science” is that it’s incredibly self-aware. The point in which the story realizes it’s not working is so obvious, and the switch is very jarring. The episode’s killer is revealed near the end of the second act, so it’s clear that the intrigue for that plotline is being abandoned for something with a little more relevance to the ever improving plot involving Max Rager. Unfortunately, that all but wastes all the effort put in to defining the mystery of the week, which despite some solid acting, can’t be bothered to be anything more than adequate.

Despite that, the episode does succeed in the area of the utility of Liv’s scientist brain. There’s a lot of mileage in this one, going so far as the give us an insight in to her intelligent and complex thought process via Sherlocklike text overlays. It’s also the catalyst for a enlightening infiltration of the Max Rager facility. The Blaine side of the story, while entertaining, doesn’t add a whole lot to the proceedings beyond teasing an uncertain future for the his character.

Final Word: The Max Rager scenes add insight to “He Blinded Me…with Science,” even giving us a look at the true power of the forces Vaughn Du Clark and his team are tampering with. Blaine’s resurrection in the last episode, while seemingly convenient has consequences that start to crop up in this episode, and there’s still some suspense relating to the cure and how the effects are still at play. The murder mystery on the other hand ends up being a whole lot of pomp and circumstance, and while I usually praise the simplicity of these resolutions, this one was just a little too out of left field to take seriously.

“He Blinded Me…with Science” gets a 7.5/10. Everything works together, but some aspects work better than others. Unfortunately, those aren’t the ones that get the most attention.