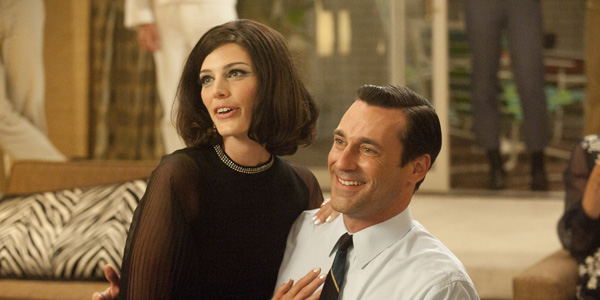 It’s been a long year and a half wait for AMC’s Mad Men to return to the air, and this week’s double-length premiere had a lot to offer us starving SCDP addicts. As we enter 1966 with Don Draper and his fellow ad men, the scene is immediately set for a whole new world, between the burgeoning civil rights movement, and some major personal changes to contend with at the same time.

The times they are a-changing. So said Bob Dylan in his classic 1964 folk anthem, and while Mad Men is a show with too much integrity to include a song so on-the-nose, that theme is all over the premiere of Season Five. As we are re-introduced to SCDP, we find quite a few major changes have taken place– Don has officially made a new home with his second wife Megan, while Pete and Trudy and Joan both experience life as new parents, with very different results. While Joan is desperate for her chance to return to work, Pete has not settled with just his new suburban life, inspired to continue growing his account list with more determination than ever. I never imagined back during the first season that the snivelling junior exec would become quite possibly the most interesting character of this top-notch group, but that’s really happening now as Pete seems to be embracing the coming social changes much faster than any of his senior partners… including Don.

The episode begins as rival ad firm Y&R pulls a prank on a group of civil rights protesters, only to have the gag blow up in their face. Their public humiliation is taken advantage of by SCDP, who decide to run an equal opportunity employment ad in the trades. While Don and the increasingly belligerent Roger hatch the plan to stick it to their competitors, Pete is the only one generally appalled at the mishap, labelling the pranksters as bigots. Between this social consciousness and Pete’s growing disgust with the hard-drinking, chain-smoking office antics of his partners, he is becoming the personification of the social progress catching up fast…

While Pete is an advocate for change, Roger is becoming increasingly boorish, attempting to snipe Pete’s accounts as often as he can, and brushing off any obligation regarding the child he fathered with Joan. Until now, there has been enough charm to Roger to wash away the impact of his worse qualities, but that charisma seems to be eroding now, and I’m interested to see how far down this dark path he may go.

As Lane desperately tries to keep the still-flailing business afloat and Bert realizes more and more how obsolete he is becoming, Don is caught squarely in the middle. Don has always been hungry, and ready to fight and force his way to the top– four seasons have proven that’s who he is. But between his new, younger wife Megan and his impending 40th birthday, Don now strangely seems to be resting on laurels. He doesn’t have the same fire fueling him, much to the frustration of Peggy, who is let down by her mentor as he refuses to defend her creative direction on a Heinz ad campaign. Much of “A Little Kiss” focuses on Don’s growing awareness of how much change has been going on around him, which he has been ignoring until now. In additon to Pete and Peggy, Megan adds another outlet for this quickly-evolving new reality. Youthful and idealistic, Megan’s relationship with Don is already much healthier than his first marriage with Betty, but unlike the submissive and generally miserable Betts, Megan is much more active in making sure things stay open– it’s obviously a terrible idea to throw Don a surprise party, but that doesn’t dissuade Megan, even after Don blows up on her when the party is winding down. Megan has a feistiness in her that Betty never did, one that echoes the younger Don of previous seasons– she’s stubborn, and not afraid to call Don out on his bullshit, and I hope their interplay continues as the new season progresses, as she continues to challenge Don and force out a new side of our main ad man. I’m sure things will continue to build as Megan spurs Don to change with the new times more and more, but whether their still-young relationship will survive intact is the major question, which I can’t even begin to predict yet.

The extra hour of this premiere meant there was lots of time to provide each major character with some meaty  moments, and it served as a great jumping-on point for new viewers, while perfectly reminding existing fans like myself exactly how incredibly realized these characters are. I do feel that Peggy was short-changed a bit, which is definitely a disappointment as a big-time Peggy fan, but what we do get of the creative director is excellent, and I love that her confidence has only grown as she stands up for her concepts in client meetings that way Don would have in the past. While she has yet to find her voice as a salesperson (the missing ingredient to match Don’s success with clients), her cocky attitude is a wonderful payoff revealing just how far the previously meek secretary has come.

The idea of change is obviously going to be a bigger theme this season that ever before. What’s interesting is, at this point the major changes have already happened– the civil rights movement is in full swing, Don’s younger colleagues and wife are beginning to chip away at the old system, and a new day is certainly in the air as the older, more settled characters seem stuck at a crossroads. Will Don fight against the changes all around him in a desperate attempt for stability? Or will he acquiesce to evolution and move forward alongside Megan, Pete, Peggy and the other forward thinkers? Based on this re-introduction, I have a feeling this season will really focus on which of the ad men can catch up with the times, and who will be left behind… where Don will find himself in this conflict is a very intriguing mystery, and one I cannot wait to see play out.