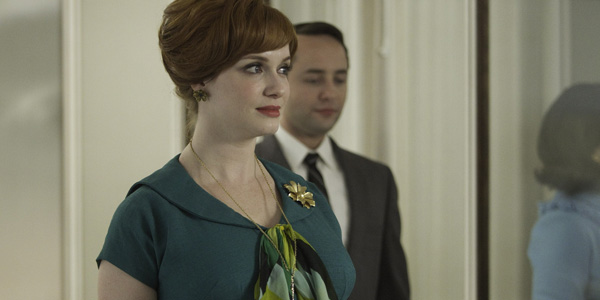 Never have times been so tumultuous behind the glass walls at SDCP than in the latest episode of Mad Men.  Almost the entire episode focused tightly on the business side of things, specifically the agency’s attempt to acquire Jaguar and the measures it took to do so.  It was intense, emotional, and ultimately heartbreaking, and it was the most captivating episode of this season.

I always like to know what the title of each new episode is before it airs so that I can try to imagine how it might tie into the story.  The title “The Other Woman” could have alluded to any number of things — Pete’s extra-marital relationship, the small possibility of Don once again being unfaithful – but, as usual, the writers took the story off in a few completely unforeseen directions.

It turns out Pete and Don are both too busy with Jaguar to even think about anything, or anyone, else, much to the chagrin of Peggy who has been toiling away on another account.  She has  lunch with Freddy Rumsen, former copywriter for Sterling-Cooper and Peggy’s white knight, who helped convince her that her talents could be truly appreciated elsewhere.  Even though Peggy has threatened to quit time and again, it’s hard to believe that she would actually abandon the agency that taught her everything she knows.  The scene in Don’s office when she breaks the news has to be the most strongly acted scene in the show’s history; the pain in Don’s face is heartbreaking and the tears streaming from Peggy’s eyes are unmistakably real.  Jon Hamm and Elisabeth Moss have only solidified their statuses as some of the best actors on television or otherwise with that scene. 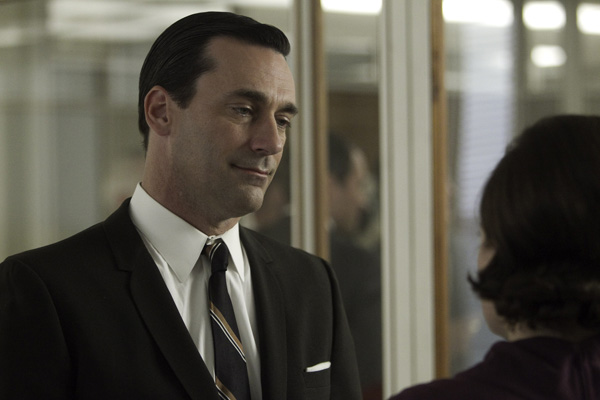 Christina Hendricks was also impeccable in this episode.  When one of the executives of Jaguar wants a night with Joan in return for his vote in favor of the agency, everyone has their own take on the situation.  Don and Bert are the only ones looking out for Joan, while Roger is bizarrely dismissive of the whole ordeal.  Pete is back to his conniving and shrewd self, representing the businessman who will do anything to get what he wants, even at the expense of others.  Pryce finally showed that he can be selfish after all, even though he clearly has feelings for Joan; he convinced her to demand a 5% partnership in the company in exchange for her one night stand because he knew that his recent theft of $50,000 would be exposed if the partners were to go into the books and cut Joan a check.  This ultimately drives Joan to spend the night with the creepy Jaguar executive in a heart wrenching scene that has Joan at her most vulnerable.  It’s difficult to watch a resolute woman like Joan give up complete control, and Hendricks once again masterfully handled tough subject material with grace.

Although Joan was the biggest boon to the company’s Jaguar pitch, Ginsberg showed his natural talent again by coming up with a great tagline that Don didn’t do anything to change.  Finally gaining the approval of Don clearly meant a lot to him, and without Peggy around the offices anymore it might be Ginsberg’s turn to constantly box Don’s shadow.

So, let’s run down the major outcomes of “The Other Woman”: SDCP acquired Jaguar in a bittersweet victory, Joan became a partner, and Peggy left.  These are huge events that could have easily taken up three episodes, but they were all skillfully weaved into one.  Only two episodes remain in this season, and it’s impossible to predict how things will turn out.  The last few episodes of each season have been routinely incredible, and there’s no reason to think that this one will be any different.