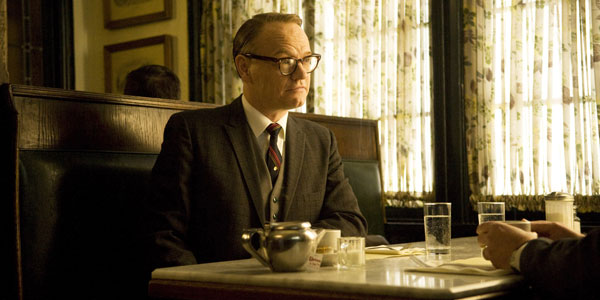 Ouch, that really hurt. While Sally becomes a woman, Don gets more aggressive than ever (at least, in the office), and we say an incredibly sad goodbye to a partner at SCDP.  This had to be the gut-punching-est episode of Mad Men yet.

It’s virtually impossible to discuss this week’s installment of Mad Men without getting into some MAJOR spoilers, so before we go forward I’m issuing a SPOILER WARNING for anybody who hasn’t seen the episode yet… seriously– if you have yet to watch this week’s episode, 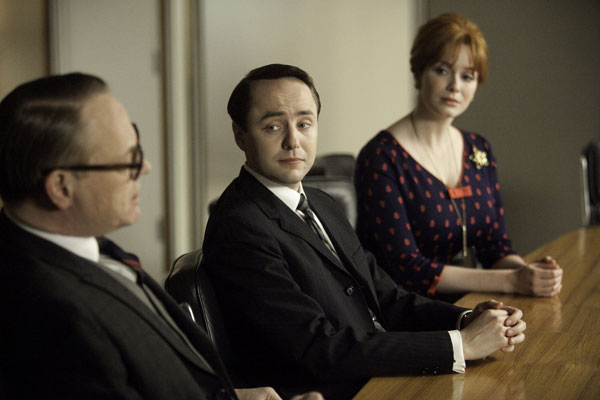 There’s plenty going on in “Commissions and Fees,” but the central line of the entire episode is the tragic death of Lane Pryce. From the opening scenes where Lane’s recent embezzlement is discovered by Don to the reveal of the Financial Manager’s lifeless body, the setup for Lane’s death is very written on the wall throughout the entire hour. Much of Mad Men carries with it an impending sense of darkness and doom, and this episode cranked that feeling up to eleven as we follow Lane’s final hours.

For his part, Don’s decision to let Lane resign rather than fire him is actually harshly kind– while some view Draper’s reaction as cold toward his fellow partner, the simple fact is Lane stole a LOT of money from the failing company. It’s impossible to trust a money man when he was caught red handed lifting from the coffers, and as such Lane made himself a liability.  But who is Don– or the other partners for that matter– to judge? After all, the entire team at the head of SCDP have proven time and again what an unsavory bunch they are.

The big difference with Lane is, for all the lies, all the cheating and all the underhanded deeds committed by Don, Roger, Pete and the rest, the one thing they never do is endanger the firm. They’re all company men, and the simple truth is they all love the company far more than anything else in their lives– outside of the office, they are petty, sad, miserable cads and losers. At the office, they are kings.  And they will defend the company far more than any other aspect of their lives, as SCDP is the only place where they get to be the men their egos claim.  Don’s leniency toward Lane is based on their friendship, certainly, but I’m betting even Don can’t fully judge his co-worker, since he may be the dirtiest dealer of the bunch.

The real tragedy of Lane is his incessant need to hide the perceived shame of his personal failings. His stiff upper lip attitude means he would literally rather hang himself in his office than be outed as a desperate man failing in his personal life. If Lane had simply been honest with his partners about his dire financial straits, even the most hard-assed of them would certainly be willing to help their associate. But Lane’s obsessive pride means he would rather steal, even at the risk of being caught.  And again once his ties with SCDP are severed, Lane’s hubris won’t allow him to admit his failure to his wife. Her thoughtful gift of a Jaguar for her long-suffering husband should be a sweet gesture, but in the context of what just happened, it feels more like a punch to the kidneys, for Lane and for us.

The harshness doesn’t stop, as we watch Lane attempt to kill himself by suffocating in his new car, only to have the notorious Jaguar engine refuse to turn over.  It seems like a reprieve, that perhaps the setup of Lane’s death is a clever ruse by Weiner and his writers… I had really hoped for some kind of redemption for the eternally decent (though proud to a fault) businessman, but the flubbed death by Jaguar and his final rejection by Joan end up just more failures in the cruel litany of suffering laid upon him.  Lane kills himself in his office off camera, unknown to his co-workers who are too embroiled to notice his locked door until long after it is too late. The harshest part of the Passion of Lane is the detached, almost clinical way in which his final hours are portrayed. As always, Jared Harris is absolutely incredible, but the ongoing suffering of Pryce is not played with any emotion, drama or even empathy. The proper English gentleman most likely wouldn’t have it any other way, and his death ends up being as cold, sad and distant as he felt himself in life. 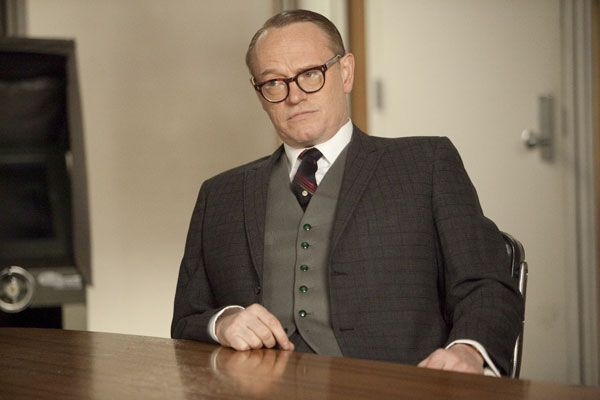 During their talk, Don offers Lane some personal advice that starting over can be hard, but it is perfectly possible. This is a truly American ideal, that we can all bounce back from the most devastating of shame, humiliation and tragedy to essentially reboot our lives as often as needed. As an emigrate, Lane never really seemed to grasp that concept, still too hung up on the old world mentality that your name means everything and as heir apparent of that name you will bear the weight of generations of success OR failure. In America, names mean nothing (see: Don’s stolen identity), and Lane could have picked himself up and started over anywhere– the true grace of Don’s offer to let Lane leave on his own terms meant his crimes would be forever buried, and he could easily start again as the Financial Director of any company in the city.  However Lane’s pride and frustration with the ad men and what they represent (just listen to his tone as he accuses Don of not caring what $7,500 means) means from his point of view, death was the only way out of this.

In real life, one of the things I always think in a situation like this is, did I miss something? Were there warning signs I just didn’t see? In Lane’s case, his extreme privacy and self-imposed distance from his associates meant there was little they could work with regarding warning signs, although Don’s drive to start actively pursuing much bigger clients– including Cosgrove’s father in law’s company Corning– meant he would clearly miss any signs in front of him.  Don has lost his right hand with Peggy’s departure last week, and firing Lane on top of that has left Don spinning slightly out of control it seems… he’s reaching higher than ever before in an attempt to move forward, finally giving in to the old hunger he ignored for the first half of the season… but without a support staff behind him anymore, can Don follow through on his promises, even if he does manage to land one of his white whale accounts?

He also has to deal with Sally’s burgeoning puberty, which kicks into high gear as she is dropped off at his apartment with no warning to Megan, and then proceeds to sneak out to the museum with creepy Glen Bishop. The overt growing up on display here is Sally getting her first period in the middle of the museum, but that’s nowhere near as loaded as the conversation that precedes it… Glen is getting beat up at school and he admits to Sally it would stop if he bragged to them about having sex with her on his visit. Neither kid has any inclination to act upon this, but Sally is more than comfortable with Glen saying they did– and with that, even before the biological change, Sally has become a woman in the world of Mad men, realizing the power in her ability to leverage her sexuality. It might not seem like a big deal in and of itself, but Sally has been an increasingly aware victim of sexual politics her whole life– between Don and Betty’s ongoing domestic problems, the escapades she’s begun to see with Don’s co-workers, and a growing understanding of the sexual revolution just beginning, this could be the start of a dangerous path for the young lady. 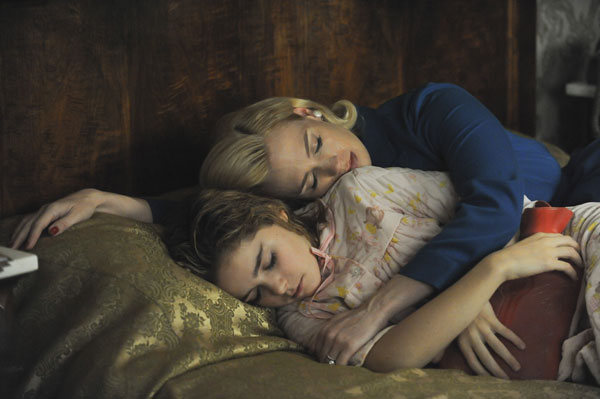 Don’s daughter may have hit it off with Megan, but their relationship is clearly more based in kinship than guardianship… when Sally has her emergency, she travels all the way home to Betty for help, rather than the much closer Megan. With luck, this regression to childhood– Sally’s specific need for her mother– will quell the tide of her misguided sexual awakening, at least for a while.

There’s only one episode left this season, and after the heaviness of the last few weeks I don’t think we’re nearly out of the woods yet.  Lane’s death was heart-wrenchingly tragic, and the fallout is already impacting the office… Don’s horror at the discovery of Lane’s suicide note– a simple resignation letter– does nothing to end the overall feeling of impending dread that has cast its shadow over the last two weeks. Lane will be missed greatly, and his death will certainly impact his co-workers and family as we enter the finale. Between this loss, the increasing hints at turmoil brewing just beneath the surface for Don and Megan, Peggy’s absence and its impact on Don, and Draper’s tight rope act of reaching possibly too high too soon… all lead me to believe this season is absolutely going to end on a down note.

We’ll find out on Sunday if I’m right.