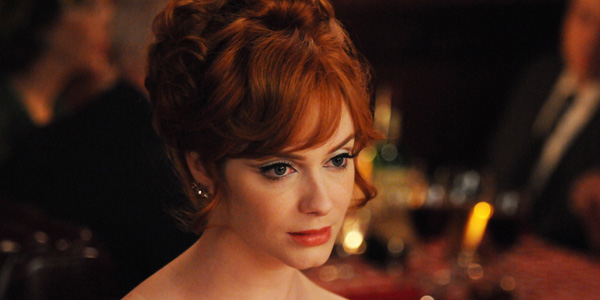 Matthew Weiner is not playing games. “Mystery Date,” the ironically-titled latest episode of Mad Men proves that, with a plot denser than any I can remeber for this show, and a rapid-fire succession of compelling and downright brutal character moments which bring the pacing of this season to a breakneck new speed. It makes for a real edge-of-your-seat thriller of an episode, and a high point, even for this perpetually stellar series.

One of the best parts about Mad Men is how it applies so many storytelling genres and adapts them perfectly into the world of Don Draper and his cohorts at SCDP. “Mystery Date” is the first time we’ve ever really ventured into horror territory in this perfectly-painted 1960’s landscape, and it takes our cast down some very intriguing paths both new and old.

“Waitaminute– a horror episode… of Mad Men??” you ask.

Yup, and they absolutely nailed it. Like any good horror, there’s quite a few levels to the proceedings. From the more reality-based terrors such as the Chicago Nurse murders which has most of the office talking, and Don’s worsening cough (obviously foreshadowed by Betty’s cancer scare last week) to some much more character-driven moments of desperation, this is a downright scary installment in the series. Don’s poor health seems to be based on a cold he’s nursing, which worsens as he pushes himself to make it through to a client meeting with Butler. At the meeting, Michael Ginsberg (quickly becoming a standout character, in just two short weeks) hijacks Don’s pitch, selling a new idea to the clients without first passing it by his boss. Don’s response tries to come off like a threat to the cocky copywriter, but Don is realizing quickly that the next generation is nipping more and more at his heels. In addition to the unpredicatble Ginsberg, Don is realizing just how much more spine Megan has than Betty, as she calls him out on the slightest hint of infidelity after he runs into one of his former flings. Don’s trying to remain faithful– it’s becoming more obvious to both him and us that Megan is not going to sit back and put up with his philandering ways like his self-loathing ex did. This pressure is something Don clearly cares about, but it clashes with his alpha male persona, and when rolled in with Ginsberg’s unwitting coup in the meeting and his growing fever, it leads Don into a fever dream that really delves head-on into horror. Andrea, the fling Don ran into in the SCDP elevator breaks into his house while he recovers, desperate for another hook-up with him. After fending off her advances, the delirious Don finally gives in and sleeps with her while Megan is on her way home from the office. But the guilt of what he did– combined with Andrea’s mocking tone as he professes his desire to staying faithful to his new wife– causes him to snap, strangling the woman to death and hiding her corpse underneath the bed. It’s a more intense and brutal scene than I ever thought I’d see on this show and the payoff is perfect as Don wakes up drenched in sweat and Megan checks in on him. It seems Andrea’s murder was part of Don’s delirium… but what about the affair?

Don’s not the only one in trouble this week… his protege Peggy finds herself struggling with even more internalized darkness, as she begins to question how far she can really keep going at SCDP without becoming “one of them.” It starts as she takes advantage of the hapless Roger, who begs her to stay at the office to design a campaign for Mohawk Airlines in Ginsberg’s random absence. Peggy agrees, after grifting Roger for all the money in his wallet, but her success is short-lioved, as a talk later with Dawn makes her realize how like the men in the office her scam was. Peggy invites Dawn to stay with her, since Dawn’s Harlem home is too far to travel at night, and their night ends with Peggy realizing she may not be as progressive as she though. The silent scene in which Peggy and Dawn lock eyes as Peggy realizes she left her cash-filled purse on the table next to Dawn, and visibly fights her urge to grab it out of the black girl’s reach, is brilliantly realized, and I am fascinated to see what repercussions it will have for both women.

Joan seems to be in a much better place this week, as Greg returns home from Vietnam and reconnects with his wife. But Joan’s apparent happiness is really just another layer of the dread and despair on display this week, as Greg comes back just long enough to remind everyone involved what a presumptuous and domineering creep he is. Virtually disregarding his “son” altogether, Greg reveals that he’s volunteering to go back to the war in ten days, leaving Joan alone with Kevin once again. Since every horror story needs a heroine, Joanie fills that role here as she decides that if Greg is going to abandon his family again he is not welcome back– she cuts ties with him completely, finally embracing that she alone will raise her son.

The last would-be victim of this week’s scary story is Sally, Don’s fast-maturing daughter. As Betty and Henry are away, Henry’s harsh mother Pauline watches Sally. The little girl is becoming yet another addictively watchable character, at the difficult age where she wants to be an adult– incensed that Pauline will not let her read the news story on the Chicago killer– but is still clearly a child. When she steals the paper and reads the story, Sally expectedly has the bejeezus scared out of her. In some ways, Sally has already matured more than her mother, though. As she talks with Pauline she truly empathizes with the cruel older woman, whose father was abusive to her as a girl, and we get a touching climax to their interplay as the terrified Sally turns to Pauline for protection at night, which the previously-cold woman provides.

The rapidly, even violently changing climate of the late 60’s has already been a core theme of this season of Mad Men, and I love this week for revealing Don’s apathy to this strange new world isn’t based on ignorance but fear– he’s afraid of all the change that is closing in on him, both personally, professionally and socially. Of all the “old guard,” Don is still the one who may be able to not only survive but adapt to the new world, but the very concept of it terrifies him, and this week’s dread and doom suggest maybe his fear is founded. The rest of SCDP’s mainstays are grappling with their own demons, be it Joan’s fear of abandonment or Peggy’s fear of conformity, and framing these very personal anxieties around the tumult of the airline strikes, the shock of the Chicago nurse murders, and some classic cinematic horror cliches is a brilliant choice. While these external terrors create an atmosphere of dread and menace, it’s the very personal terror that comes from these character’s self-realizations that really makes “Mystery Date” the scariest hour of television I’ve seen in a long time.