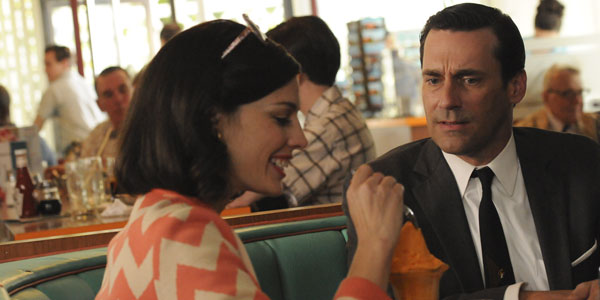 The new season of Mad Men continues to charge forward, packing some dense and heavy character studies into what has been a flat-out brilliantly written and beautifully realized season. From a dabble into horror two weeks back to last week’s heartbreaking spotlight on Pete and Lane, I keep expecting the bottom to fall out on just how good this show is, but I’m starting to this that shoe is nowhere near falling– in fact this week’s “Far Away Places” may have been the most compelling and entertaining episode of the season.

This week’s Mad Men trims the focus to only a few of our players– three couples, in fact– and focuses on that strange and weird this line between love, hate, work and life, through the lens of our three troubled couples. Peggy, Roger and Don are all pretty distinct people… as they all continue to evolve (or at least change), the only solid thread that connects all three is SCDP, and those differences really rise to the surface as each deals with the crisis of their softly crumbling personal relationships.

Peggy, straightforward and pragmatic as always, opts for a clean split with her beleaguered boyfriend who is beyond tired of her turning him into an unofficial “focus group” for her projects at work. The rift really stems from Peggy’s inability to let go of her work, and it’s interesting that typically positive traits like motivation and drive can turn into deep character flaws, bordering on obsession for Peggy. She has invested so much into her work life in her perpetual uphill battle to be recognized as a peer and get the approval of the men of the office. Because of this, she can’t let go even on those rare nights when she’s not pulling an all-nighter at the office, and the obsessive part of her personality comes out when she explodes at her Heinz client, telling him off for his (admittedly) obnoxious and stupid disapproval of her concepts, which are to the letter what he wanted. With her pitch ruined, Peggy leaves SCDP to catch a movie, which is a big deal for the work-focused copywriter. One of Peggy’s constant fears is that the only way to get the respect she craves is to become just like the men she works under, and this week she unwittingly travels down that path, blowing off work after a sour meeting, and then smoking weed with a getting off a random guy in the movie theater. It’s troublingly close to the behavior we’ve come to expect from the likes of Don and Roger, but unlike them an office conversation with Ginsberg brings Peggy back down to Earth, as despite her increasingly uncompromising attitude, she still has an empathy that can save her human relationships. 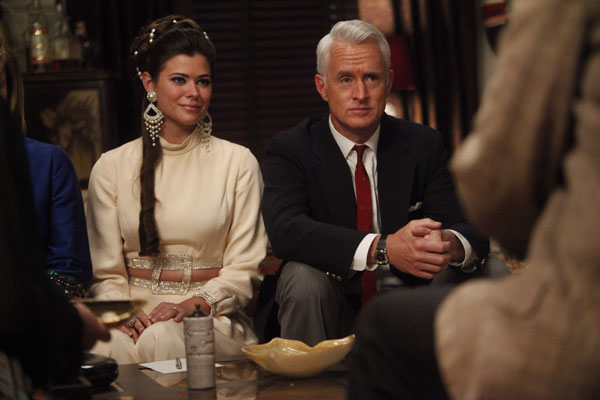 On the other end of the spectrum is Roger, who gets some of the funniest scenes this week as he and his semi-estranged wife Jane attend a dinner party which Roger learns after the fact is an LSD party. The ad man acquiesces to his wife’s request and as the two trip for the first time, their dirty laundry comes out in a surprisingly civil and controlled way, a great left-turn from the hostile and explosive dissolution of Roger’s previous marriage with Mona… at least, at first. The acid scene was very well handled here, and I totally buy that Roger would hear jazz music coming from a liquor bottle or imagine he’s at a ball game while tripping balls.  I loved it, especially the intimate discussion between the two former lovers when they both admit they’ve grown apart. The catch of this civil break doesn’t rear its head until the next morning, when Roger has resolved to leave while Jane admits she was not speaking seriously during their trip. After his first heartfelt scene in about three seasons, John Slattery absolutely nails his return to the callous and completely dickish jerk we know is at the heart of his character, casually exiting the house as his shocked wife tries to wrap her head around what’s going on. It’s a shift so sudden, so hilarious and so perfect Slattery should get a Emmy nod for that two minutes alone.

In an episode centered on marital strife, it would be virtually impossible to not include Don, and his story as he comes close to losing Megan is interwoven nicely between Peggy and Roger’s arcs. There’s a nice structure at play here as the reveal that these stories are overlapping doesn’t become clear until the last half of the episode, as we shift gears to focus on Don’s daytrip with Megan to Howard Johnson, to scout the potential client. Megan is pulled out of work suddenly, and her frustration that Don doesn’t respect her work brings things to a quick boil, especially as he shifts straight to his own business as soon as they arrive at Howard Johnson. If it’s not obvious yet, I adore Megan as a character, and I love how she is first introduced as a light, trophy wife type, only to reveal a strong and decidedly modern feminist as we get to know her better. It seems Don is the last to realize his new lady is more than arm candy… and clearly not the punching bag Betty was either. After their inevitable fight at HoJo, Don drives off leaving Megan behind. Were it Betty, she would obviously stay at the hotel and brood, until Don cooled off and came to get her. But Megan is not interested in Don’s tantrum, and finds her own way home. When Don returns to pick her up and finds out she is gone, he breaks down. Even after he tracks her back to their apartment, Don goes into a one-two punch of furious menacing and absolute dependence, showing Megan both sides of his conflicted personality. The scene of Don breaking down in tears, his head leaning into Megan’s stomach is telling of just how much power she has over him, and this leads to both fear and desperation– Don really doesn’t know his new wife, and especially doesn’t know how to react to her.  Megan is shaping up to be the embodiment of the new world of the late 60’s in many ways, and she is the perfect catalyst for Don to slowly comes to terms with his modern life. Bert gets the best line of the episode, to close things off on a related note. After the senior partner chastises Don for his lack of attention at work, Don says it’s none of Bert’s business.

“It IS my business,” Bert replies. Unlike Roger’s lack of cognition, Lane’s shortage on assertion, and Pete’s self loathing, Bert’s quip sends a clear message to Don– it’s time to step up, or fall into obscurity. Where things go from here is all in Don’s hands now. And right now, that concept terrifies him. 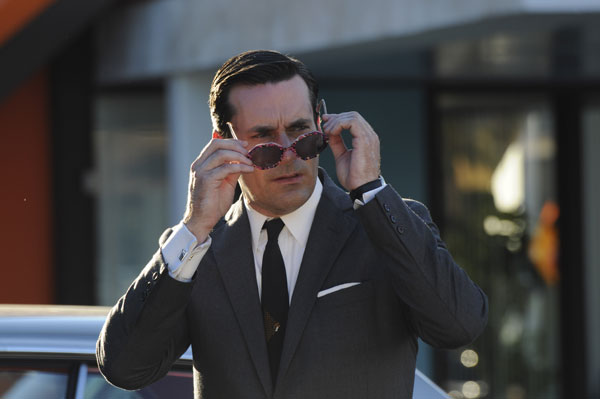