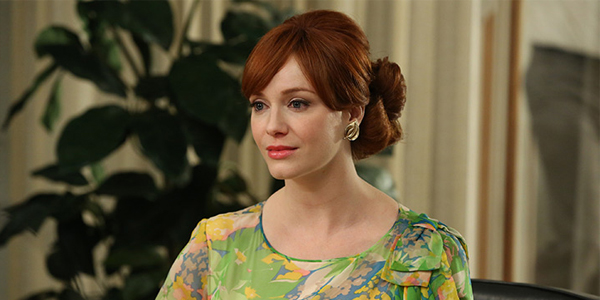 As season six nears its final few episodes, Joan finally begins to assert herself and Don has yet another bad trip.

While relatively uneventful and far from the best episode of this season, A Tale of Two Cities still moved the story forward and showed some significant development in Joan. The overall theme of the episode was the constant shift happening within the agency since Cutler and Shaw entered the fray, and that was evident in most of the characters.

When Joan has a serendipitous encounter with the head of marketing for Avon Cosmetics and gets a taste of what it might feel like to actually be responsible for landing a client, the feeling quickly goes to her head. The only real connection she has had to any client was the demeaning night spent with Herb from Jaguar, but she proved that she actually does know about the industry and the benefits that her agency can offer. Christina Hendricks really showed off her acting chops this episode, switching from confident and intimidating – but ultimately insecure – to a risk-taking and assertive member of SCDP.

Joan’s rebellious side came to the forefront when she intentionally went against protocol and excluded Pete from the follow-up breakfast with the Avon employee, sending that perpetual drama queen into another fit of rage that culminated in one strange, creepy episode ending.

Meanwhile Harry, Don and Roger were on a trip to Los Angeles to pitch to a potential instant breakfast client, who wasn’t very receptive. The main focus of this trip was the party that they attended for potential connections with movie moguls, and that ended up being yet another bad trip for Don. Drugs never agree with him, and this time he had a vision of Megan quitting her job and becoming pregnant (could that be what he really wants, even though he seems to care about her less and less by the episode?) and the soldier he met in Hawaii before almost drowning in a pool.

The last few minutes of the episode brought a big surprise – the name of the agency once again changed to a much more manageable Sterling, Cooper & Partners.

As Cutler attempts to split the agency and assemble his own team, the mysterious Bob Benson gets another big break when he’s added to the Chevy account team. Benson is becoming more of a central character after coming from nowhere, but we still know very little about him. There has been a lot of discussion about this character; specifically, his bland name and blank past have been causing many to wonder if he might be the next Don. He’s quickly becoming one of the most engaging characters and another great reason to be excited for the last few episodes of season six.