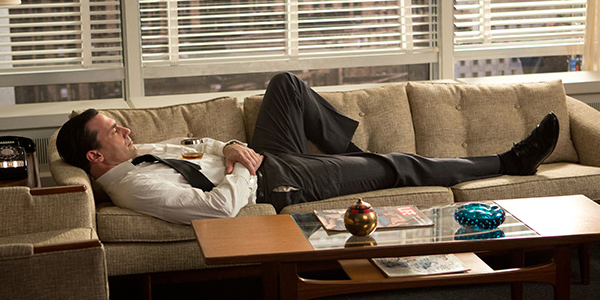 As season six draws to a close, Don continues his inevitable descent towards irredeemability; Pete finally gains the upper hand on his mysterious foil, Bob Benson; and Ken Cosgrove gets shot in the face.

Keeping with the trend of most Mad Men seasons, this penultimate episode of season six was incredible. The big focal point was the reveal of Bob Benson’s true identity (or lack thereof) and Pete’s realization that in Bob is a chance to redeem himself after Don outsmarted him last time. The parallels between Don and Bob were really made apparent in this episode, but we still don’t know enough about Bob’s daily life outside of work to see his true colors. Perhaps more important than learning that Bob is a nobody who has been living a lie this whole time is the effect the whole scenario has on Pete. He hasn’t had much confidence in himself for a while now, and Pete with a little bit of power can be a very dangerous thing, to himself and to those around him.

Having recovered slightly from last week’s life-shattering moment of discovery, Don continued with reckless abandon his path into complete despair and failure of the professional, personal and emotional varieties. Having already lost his actual daughter, the increasingly intense bond between Ted and Peggy – his work daughter, so to speak – is making him feel even worse for himself. He starts getting back at Ted immediately by once again going behind his back on the Ocean Spray/Sunkist debacle and then embarrassing him in front of St. Johnson’s. He’s risking the integrity of the agency for his own personal satisfaction, something that’s low and unexpected even by his standards. When Peggy finally calls him a monster, effectively losing him his only other meaningful fatherly relationship, he goes right back to square one in the fetal position.

Watching Don become slowly undone throughout the season hasn’t been surprising, but it has been increasingly difficult to watch. For all of his infidelity and overall awfulness, he has had some significant positive impacts on many of his peers and loved ones, and to see them all turn away from him is somewhat depressing. Equally depressing is Megan’s relentless support of a man who couldn’t care less about her, as she has remained one of the few virtuous characters on this show.

With her dad completely lost to her, Sally heads off to Miss Porter’s, the prestigious all girl boarding school in Connecticut. She meets two mean girls immediately, and earns their respect by inviting none other than Glen (who appears to age about 5 years between every season) and his stoner friend Rolo over to their dorm. Rolo doesn’t help to redeem the male population in Sally’s eyes, as he’s only interested in “fooling around” with her. Sally, in dire need of some kind of supportive and protective male figure, lures Glen out of his encounter with Sally’s roommate to fight off Rolo, apparently pleasing Sally more than any physical contact might have.

This episode perfectly led into the finale, with so many story threads left hanging just enough to leave us with questions and the comfort that they’ll probably be answered soon.