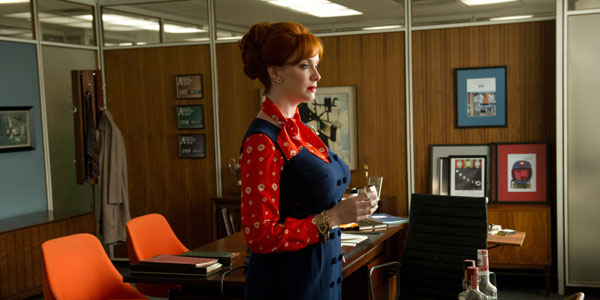 Worlds better than last week’s self-indulgent premiere, “The Collaborators” still didn’t quite come together as this rocky season of Mad Men rolls on.

I’m not quite sure what’s off with this season of Mad Men, but things don’t feel like they should. Maybe that’s part of the bigger concept at play– the cultural revolution of the late 60’s is reaching its twilight, and by the end of Season 5, most of SCDP came to the belief that they could ignore it entirely, with no real need to get with the times.

“The Collaborators” had a lot to love, even if the whole thing felt more like a series of wonderful scenes that never really gelled as a whole.  The most exciting stuff happened at the office, as two clients from SCDP’s past resurface this week.  Heinz beans rep Raymond Geiger gets his marching orders, bringing the vastly more successful Ketchup rep in for a meeting at the agency that (eventually) had great success with his campaign, but Geiger quickly admits behind the scenes that there’s no potential for Heinz’ cash cow to migrate to a new ad agency.

But just when it seemed that we were witnessing another indulgent riff of a sequence, Peggy catches wind of the meeting thanks to her boyfriend, which leads to her new boss at Cutler, Gleason and Chaough smelling potential blood in the water and courting the condiment giant for a meeting of his own.  It’s indicative of the forward thinking that may leave SCDP in the dust, as they babysit their clients while other firms risk it all for a big break… a move Don and his associates would have made in a heartbeat five years earlier.

And speaking of babysitting, SCDP is also paid a visit by the loathsome Herb at Jaguar.  You may remember Herb as the guy whose indecent proposal lead to him sleeping with Joan in exchange for her partnership stake in the company, a move endorsed by each senior partner who wasn’t Don Draper.  Joan gets a great scene as she encounters the would-be Lothario in the office, and Christina Hendricks acts the hell out of her caustic interchange with the sleazy car salesman. It’s criminal she hasn’t had more to do this season, especially with how much she packs into her few brief, brilliant moments.

Don proves he has no love lost for Herb, either, which is only aggravated as the Jaguar dealer walks in with a monumentally stupid plan to shift his advertising dollars to reach a wider demographic.  The best bit in “The Collaborators” is Don’s standoff with Herb, in which he turns the tables by revealing the utter idiocy of his client’s self-centered  scheme, and though most of the argument goes straight over Herb’s head, Draper’s partners notice his liability-inciting attitude right away.

The best part of this young season, not surprisingly, has been Peggy, and that continues this week. The Copy Chief continues her Draper-esque transformation at her new agency, even as she struggles with her unintentional sniping of Heinz from her former associates.  She also continues to have trouble managing her team– Ms. Olson is not the hard ass her mentor was, still too focused on getting her creative underlings to like her as much as respect her. She tries to pay them a compliment even as she tears their ideas down, and the mixed message makes it very obvious she’s in full-on wish fulfillment mode, treating them the way she always hoped Don would have treated her, in a perfect world.  But the world isn’t perfect, and her critiques are met with a rude joke about her authoritative attitude being more about her period than a professional drive.  In her own way, Peggy is struggling every bit as much as Draper and his associates were last season, but she has the added hurdle of being a woman in a male-driven world… one that, as proven by SCDP, did not change nearly as drastically as predicted in the wake of the culture revolution.

There’s lots of stuff happening outside the office, as well, as we meet the new flings with which Don and Pete are dabbling. It’s not surprising that Pete finally got his covert, NYC apartment, but what I did not see coming was Trudy calling it quits when his latest affair comes to light. Though usually self-centered, Trudy is certainly not stupid, and she takes Pete’s trysts as a very personal insult (as she should, honestly).  Pete and Trudy have always been horrible for one another, and I’m intrigued to see if this split is permanent, or if the hostile, clinical relationship they have polished to look so good from the outside will be worth salvaging to either of them.

We found out last week that Don is, for sure, cheating on Megan, and this week we meet his neighbor/ mistress Sylvia (the always welcome Linda Cardellini).  Draper is certainly playing a high wire act this time– not only does Sylvia live in his building, she’s married to his new friend Dr. Rosen… and we know Megan well enough by now to be aware she won’t be one to roll over and bury her anger the way Betty used to.  This potential powder keg is so high-risk, it feels a bit too on the nose for a show that’s revered for its subtlety– that flashbacks to little Dicky Whitman growing up in a whorehouse with a Mom who is the spitting image of current flame Sylvia did not do much to tone down this rather extreme plot line.  I’m hoping the reckless abandon of this affair is part of Don’s plan… that he wants to get caught.  It seems weird any other way, that he would jeopardize everything he has so succinctly– and establish that he has lost all respect for his new wife– unless a part of him is trying to secure his own punishment when this infidelity comes to the surface.

There’s a lot of that notion going on so far on Mad Men this season.  The writing seems more heavy handed and far less deft than in the past, and I really hope Matthew Weiner and his team know what they’re doing… For now I’ll keep the faith that they do, that all these seeming shortcomings and strangely disconnected moments are building toward something great.  But in the meantime, I can’t shake the feeling that, just like the Mad Men themselves, this season is just kind of floating, without a rudder.