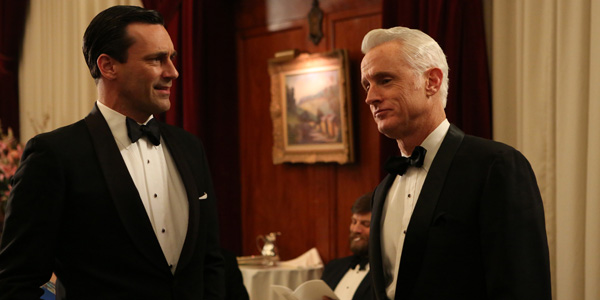 Tensions rise, and we step closer to the twilight of the 60s on this week’s captivating and intriguing episode of Mad Men.

“The Flood” might not be an instant classic like last week’s stellar “To Have and To Hold,” but it was the prime example of why Mad Men is one of the greatest shows on television.  Much of this episode revolves around the news breaking that Dr. Martin Luther King, Jr. was assassinated.  This is a dark, significant day in American history, of which we have seen several over the past six months, so the entire thing felt hauntingly true to life.

“The Flood” was wildly substantive in this light– the tragedies that rock our communities, our countries, or our world will always occur, and it was fascinating to see the hyper-real emotional fallout of the Mad Men characters after hearing the news.  I think we’ve all been there– when a tragedy takes place… what do you do?  Should we keep on with our daily routine as if nothing happened? Should we leave work for the day out of respect?  Should we keep following the story, even as the news media sensationalizes it in any way they can, or just leave it alone?

The best moments of “The Flood” are those with the characters caught in these sorts of quandries. Of course, things were even more politically charged in the New York of the late 60s– Dr. King was a non-violent civil rights advocate, but there were plenty of others who would commit to their cause by any means necessary.  There’s a wave of fear that runs through the SCDP office, leading to harsh words between an accusatory Pete and a callous Harry (who is becoming a delightfully cynical and cold-hearted villain this season), as well as another fist fight in the office.

The sadness and fear and tension in the office is a microcosm for all of New York– which suddenly feels like a powder keg, with a volatility that could change in a heartbeat– and for me anyway, I realized how odd (yet disappointingly true to life, even today) it is that SCDP is almost exclusively white.  That does, however, promise even more tension in the air as we move in to the post-King civil rights movement.

There’s more to “The Flood” than just these hauntingly contemporary shockwaves of tragedy.  The Advertising Club of New York is hosting their annual awards show when the news first breaks, and we get some wonderful character moments as Peggy and Megan reconnect while realizing they are the only ad folks we know up for awards… and they have both since left SCDP, as well as the Heinz account for which they’re nominated.  Don and the partners, meanwhile, are offended at their lousy table, feeling as if the slight is personal and not related to the fact that they have, by all accounts, been replaced by a newer, younger agency (presumably where the lions share of the nominations went?).

Roger, meanwhile, is landscaping another new account, an insurance agent named Randall Walsh, whose mystique at first shows potential for a legitimate sale. However, as he later meets with Don, Randall’s LSD-fueled talk of receiving coded messages from the ghost  of Dr. King make for an awkward and likely pointless client meeting.  Despite his impossibly bad ad concept and the ridiculous meeting, Randall does drop a line that feels remarkably important: “This is an opportunity. The heavens are telling us to change.”

The entire last season of Mad Men has been about the in-your-face change of the cultural revolution, with Draper and most of the SCDP crew standing against it in the end. But change doesn’t have to be so dramatic, and the progress they opposed last  year is slowly, subtly, creeping its way into their reality now. How else can you explain Don’s admission of his problems relating to his kids (whose sidelining this season can now be appreciated in a whole, new light)?  Of course, Don immediately goes back to fretting about mistress Sylvia’s well-being, but he has a few touching moments with Bobby, cleverly subverting Betty’s punishment of the boy and easing his fears of what’s in store for him, his parents and Henry.

Not all change is good, though, and I love Peggy’s progression toward compromised morals similar to Don’s own.  Last week, she straight-up stole his words to win the Heinz account, and this week we see her integrity get fuzzy again, as her kind of sleazy, very assertive real estate agent coaxes her into profiting off the death of MLK to score a low bid on a condo she’s trying to buy.  A few years ago, Peggy would never have considered such an underhanded, cynical move, but now while she can’t vocalize a “yes,” her silence is all the approval her agent needs.  It blows up in her face, as she loses the place, which might be for the best based on her relief when Abe admits he didn’t really want to live there.  Peggy continues to be probably the most fascinating figure on the entire series, as she’s clearly on the same path as her former mentor and friend Don, although she’s struggling to stay cleaner, and more progressive than he ever was.  I’m curious how it will work, especially in light of her feminist and progressive ideals paling in comparison to the severity of Abe’s, and after a few weeks of dabbling into underhanded business practices?

This felt like an establishing episode, moving pieces in place for a whole new dynamic as the season progresses.  Henry’s decision to run for Senate, and Betty’s realization that means she’ll finally have to come to terms with the way she looks, should prove an interesting direction, and the slow burn of Don and Megan’s issues since his backslide into his old ways continues to be a fascinating interplay.  They’re not falling apart (yet), and Megan is certainly strong enough to never be the angry victim Betty is, but the way Don is facing the modern world seems both desperate and aloof– Megan argues with him that she has no idea what he’s thinking as the episode closes, and as he stares out his balcony window with the sirens ringing out in the city, I realized that at this point, I have no idea either.