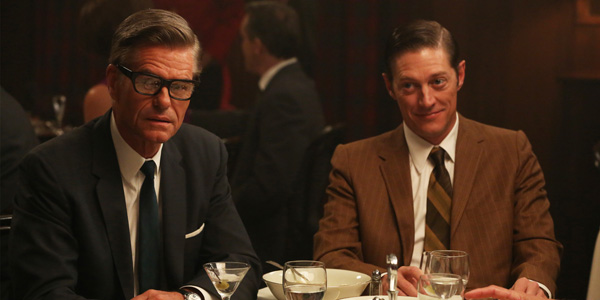 The pieces are falling into place and it looks like things are about to get very ugly at SC&P.

So for now, the quasi-coup we saw brewing of the newly-christened Sterling Cooper and Partners seems to have dissipated, although as is to be expected, things are certainly no less tense on Madison Avenue.  With the lines drawn, the two halves of the super-agency have each been courting their own juice company– Don and Roger having piqued the interest of Sunkist during their California visit, while Ted and Pete are getting in the ring with Ocean Spray.  Of course, both clients want to be exclusive, so the agency has to decide which prospect to go after for real… which quickly escalates into a much more heated debate than Cutler’s logical suggestion to go where the money is.

It’s part of the bigger war between Don and Ted, one whose frustrating, mired and counter-productive repercussions are mirrored perfectly against the backdrop of Vietnam.  And as the war inside the agency gets increasingly personal, so, too does the war outside– we finally meet Sylvia Rosen’s son, Mitchell, whose been given the death sentence-like 1-A in the draft, meaning he’s being sent to the frontlines.  The news shakes up both Sylvia and Arthur, as well as Megan, although Don at first brushes the bad news off, callously dismissing it as “not his problem.”

But the idea eats away at Don, and soon he’s trying to find an out for the boy, a way to escape his fate within the parameters of the law (after Mitchell gives up his plan to flee to Canada).  Don even feels out his clients, bringing up deferments in his meeting with staunchly pro-draft General Motors, to Ted’s horror.  But while Don’s Hail Mary play fails in the meeting, his private meeting later with Ted provides more promising results, which would seem to resolve many of the big issues we’ve seen face Draper throughout the season.  Ted offers an escape for Mitchell, by having him join the National Guard as a pilot trainee.  In exchange for pulling the necessary strings, Ted demands a truce between he and his rival/ partner, to which Don agrees with a binding handshake.

What’s interesting here are Don’s mysterious motives in all this.  His early dismissal of the Rosen’s dilemma is clearly a mask for his own troubled past in the military, a defense mechanism like many we’ve seen from the ad man.  But as Don begins to comment more and more on his own sons, and realizes each one of his small moves catches the eye of his ex-lover Sylvia, he becomes more committed to the cause, going so far as to risk the agency’s biggest client (a move the Draper of even a season ago would have fired him over).

I have no doubt that Don’s true motivations are a mix of the haunted soldier, the concerned father and the raging tailhound which all reside inside him, but the exact ratio of that cocktail remains wonderfully mysterious, leading to an elated Sylvia taking him back into her bed, at the exact same moment that Sally walks in and catches them mid-affair.

This is the bomb this week, and it’s a big one.  Sally is completely disgusted with Don after catching him, and Don realizes his beloved daughter has now become a liability, able to take down the entire world he has built in his second marriage.  The Draper children were all too young to really comprehend their Dad’s previous affairs, and even though Megan is not Sally’s mother, they’ve grown extremely close.  Both of these come into play in the edge of your seat climax as the two Drapers face off on opposite sides of Sally’s bedroom door.  Sally is angry not only that Don would hurt his new wife like this, but also that he still treats her like a child, thinking her too young and oblivious to understand what he was up to.  Kiernan Shipka acts the hell out of the scene, conveying disappointment and betrayal and disgust toward her lecherous father with a ferocity we’ve never seen from her.  We’ve known since Season 5 that Sally has grown up fast, and she does not appreciate her Dad’s pandering excuse for his philandering.

We have not seen the end of the Draper domestic dispute, of that I am sure– I doubt Sally will spill her Dad’s secret, but his paranoia over her knowing has already shaken him to the core, and Don isn’t one to let things like this go.

I guess Don isn’t the only one, though– Pete once again proves himself to be the “sour little man” he is, as he becomes convinced his mother’s dementia- fueled ramblings of an affair with her new caregiver are true.  What started as a joke escalated to another verbal battle between Pete and Mrs. Campbell, and extends to the young ad man accusing poor Bob Benson of setting the whole thing up.  Bob uses it to his advantage, coming out to Pete in his office, an act Pete responds to with a curious mix of obliqueness and confusion.  For someone as proud of their “liberal” ideals as Pete is, he’s quick to slam gays, and it’s a telling sign of his true colors as the wretched person his mother accused him of being.

And yet, despite his increasingly whiny un-likability, Pete is all the rage this week.  Bob comes out in a very forward move to show he’s interested in Campbell, and Peggy’s casual, comfortable joking with her former lover made it feel like another hookup between the two (however tragic the result would be) might be in the cards.  I sincerely hope not– yes, Pete’s correct when he says that Peggy does understand him in a way that none of the other women in his life do, but he’s equally correct when he admits that she’s become better than him.  Peggy has grown as a person in all the ways Pete has made his outward appearance seem to have grown.  But his increasingly crippling insecurities have shown that Pete’s development was arrested a long time ago, and he’s not ready to grow up.

A big theme of Season 5 was the struggle to adapt, to evolve and change with the tumultuous times of the late 60s.  While out titular ad men opted to stay the course and let the changing world go on without them, this season seems to have adopted a logical, yet even darker theme– regression.  It’s one thing to not move forward, but something else entirely to move backwards.  While business is looking up (thanks to the better half of this newly recharged agency), the old SCDP crew has fallen back into their oldest, ugliest habits… and I cannot see anything but tragedy on the horizon for the lot of them.