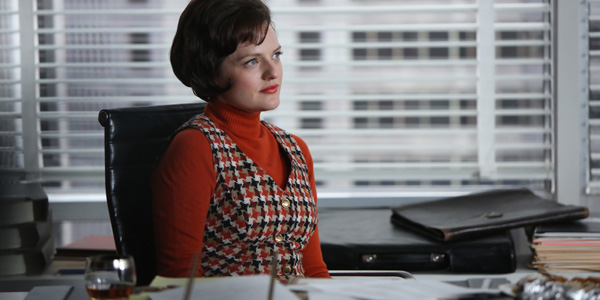 This season of Mad Men played fast and loose and heady, just like Don Draper himself, building up to a finale that doesn’t just beg, but screams the question– where do we go from here?

I’ve heard a lot of complaints about Mad Men‘s sixth season, and i just don’t get it.  Granted, the premiere felt a little sloggy, with its gratuitous extra hour, but since the plot kicked into gear, we’ve seen some of the most shocking character moments and powerful scenes in the history of the show, and the finale “In Care Of” was a real Earth shaker.

There’s spoilers to follow, so be warned if you haven’t yet seen the Mad Men finale… it’s kind of tough to talk about without going into some major plot twists which promise to make huge waves in the future of the show.

From the moment we enter Sterling Cooper and Partners (past their swanky new logo on the wall– hey!), I was hoping the rather abstract and free form season of Mad Men would come together into a satisfying whole.  There’s been a lot of moving pieces this season, with the formation of the super agency, Don’s own personal Lex Luthor in the form of omnipresent nice guy Ted, Pete’s descent into utter petulance under pressure, Sally’s rebellion after catching her father in the act of his affair… everything is addressed again in the finale (even Roger’s daughter makes a comeback, to bookend the investors pitch her Dad promised her in the premiere), and while the season’s closing moments are anything but neat and tidy, there’s a definite sense of completion to the entire thing, to the point where this episode feels like it could make for as great a series finale as a season ender.

Ever since Pete rationalized his general awfulness in storybook fashion late last season, he’s been falling apart, and being as bratty as humanly possible as his sole form of retaliation.  He lost Trudy and his suburban home already, and now he lost his poor, demented mom at sea, when she fell overboard on a cruise (now both the Campbells have apparently perished in vague, bizarre accidents).  Of course, the news shakes up the ad man, but he makes the mistake of once again taking out his frustration on Bob Benson, his unwilling partner in Detroit on the Chevy account.  But Bob has finally had enough, and his prank on Pete– forcing the ad man who can’t drive into one of Chevy’s top roadsters for a spin– is a wonderfully cathartic moment for one of my favorite new characters, and an excellent jab at Pete to (hopefully) take him down a few pegs.

What’s interesting about this scene is that we see Benson finally stepping off the high road, and it turns out he is a pretty vicious guy to have on your bad side.  Pete has been routinely awful to Benson all along, and it finally burned him… but I can’t help but wonder if Roger’s jealous prodding of the young ad man’s relationship with Joan will cause Bob to target another senior player at the firm?

Pete’s not the only one who digs his own grave at SC&P.  Peggy decides to force Ted’s hand regarding their obvious mutual attraction, and the two finally hook up in one of the sweeter love scenes in Mad Men history.  Peggy and Ted are two of the only genuinely decent people in this morally declining world of advertising, and there’s such a chemistry between them that I had always kind of hoped they’d get together.  But I knew it could never be that easy, and as soon as Ted started uttering his promises that he would leave his wife for Peggy, I knew she was in for heartbreak.  It sucks that Ted couldn’t go through with his divorce, but I get it– he’s too afraid to have his wife and kids get caught up in a divorce, and he’s seen firsthand what following your id can do, thanks to Don’s increasingly soft grip on everything around him.

It’s a wonderful scene to close out their season-long romance, and Elizabeth Moss plays it brilliantly.  Peggy begins with a sad acknowledgement as Ted explains how he can’t leave his family.  She doesn’t get upset… not until Ted changes his message from admitting his own fear, to claiming Peggy will one day realize this is a good thing.  In that moment, she discovers the truth– that ted is no different than the other men in her life, falsely believing he has a better knowledge of what is best for her.  His attitude in this scene causes Peggy to immediately switch from sadness to outrage, as she coldly credits him for an ability to make decisions, with a pained resentfulness that echoes her previous frustration throughout this season.  Peggy has come very far, but she’s always been presented with unfair obstacles set in her way by chauvinistic men in her professional and romantic lives.  Her voice went ignored as the rival ad firms joined forces, as Abe insisted they stay in their crappy, “progressive” home, and now as Ted ends their relationship in a very one-sided manner.

Peggy knows she set herself up to lose in this affair, being the “other woman” in Ted’s life.  She made that choice to pursue him regardless, and for that she’s dead to rights when things fall apart. But what she saw in Ted was someone different, a man who held her in enough regard to not control her.  And her true heartbreak is not the end of her romance with Ted, but the realization that he’s not the respectful, shining knight she thought he was.

It’s Don, however, who takes the biggest beating as Season Six comes to an end… not that he hasn’t had it coming.  Don starts out by setting himself up as the front of a new SC&P branch office in Hollywood, to personally manage the Sunkist account, and idea (and pitch) he blatantly stole from Stan.  Once he gets the idea sold to his partners, he convinces Megan they can get a new start in California, and she quits her job to start looking for work on the West Coast.  But despite all his manipulation and secret agendas, it’s an act of kindness that causes Don’s plan to unravel.  After Ted begs Draper to let him be the one to leave– to preserve his family by keeping a whole continent between him and Peggy– Don acquiesces.

The problem, however, is Megan has already quit her job, and storms off on him when he says they’re no longer going.  And the next day, Don runs a brilliant pitch to Hersheys, in an attempt to get a 10k advertising deal out of the chocolate giants.  And it works– until he decides to jettison the entire concept with an unwarranted confession of his own childhood, growing up an orphan in the whorehouse.  As his partners desperately attempt to bring the visibly shaken Hersheys reps back to the table, Don leaves the office.  When he comes back, it’s for a pre-Thanksgiving partners meeting, which results in Draper’s indefinite suspension.  As he tries halfheartedly to defend himself, it’s obvious, even to Don that his erratic actions have been placing the company in jeopardy, and he stands silent as he realizes his suspension is, really, a polite way to refer to his termination, as Duck appears alongside Draper’s potential replacement.

It was a shocker of an ending– Don’s penchant for torpedoing client meetings over the past few weeks was clearly going to bring about some kind of response from the rest of SC&P, but I never expected we’d see the ad man actually get the boot from the agency, even in those final moments of the episode. It’s a testament to the writing and acting of the show that I spent 55 minutes hating Don this week, but was immediately pulled into a sympathy for him as the judgment came down.

The big mystery now is, what will Mad Men‘s seventh season look like?  With Don cut loose, will we continue focusing on whatever comes next for him, or will the focus remain on a Draper-less SC&P?  I’m guessing it will be somewhere in between, as we can’t lose Don completely from the narrative… but the shot of Peggy sitting in her former mentor’s chair as acting creative director of the new agency was too much of a thrill for that to be the last we see of her, as well.  No matter where the story goes a year from now, I have the feeling that we’ll see more of this season’s loose, abstract ideas methodically taking shape into another dense, rich story, and after this season, I’m totally on board for that.