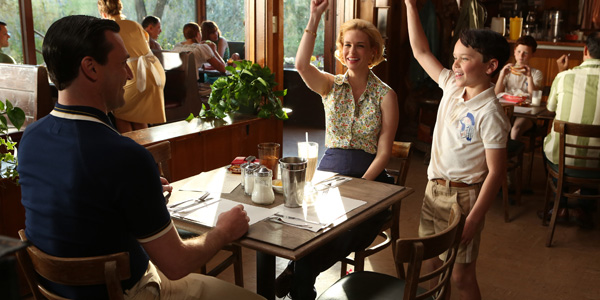 It’s “pile-on-Peggy” week at the agency formerly known as SCDP.

Poor Peggy.  Our favorite creative director certainly gets knocked around this week more than any other character– she’s immediately pulled into the latest debate between Don and Ted over which direction to go in their latest ad pitch, not long before her increasingly terrifying urban home causes lots of strife between her and Abe.  By the end of the episode, after she accidentally stabs her boyfriend and he condescendingly breaks up with her on the way to the hospital, I was almost relieved for Peggy.  Her and Abe weren’t doing hot anyway, and I, like Peggy herself, took it as one less obstacle to come between her and Ted’s seemingly burgeoning romance.  Except, it seems like there isn’t one– Peggy confides in him that Abe and she split up, and Ted’s trite words of comfort and casual dismissal make her realize their connection is nowhere near as personal as she thought.

I hope starting off this way doesn’t give the suggestion this week is Peggy’s show entirely.  It’s definitely not, as we go round robin to look at the affairs of the heart of virtually our entire increasingly damaged cast, but I feel Peggy’s subtly devastating failures in her professional and personal life– which bookend the episode– play in to the growing theme of isolation and disappointment.

Getting older sucks, there’s no getting around it (this coming from a guy who runs a toy collecting site).  It’s been interesting to see how the folks at SCDP (or whatever– still no name for the new mega-agency) have been dealing with life.  Pete, now effectively divorced, saddled with an increasingly unbalanced mother and paranoia that he’s lost his seat in the new Camelot at the agency, is desperate and more whiny than ever. You can tell he’s in dire straits, as he takes advice from Harry and speaks with a headhunter, in an attempt to set up a safety net if things fall through for him at SCDP. I’m thinking that at least one of these two will be gone from the agency by the end of the season… I’m betting on Pete, and I doubt it will be an amicable departure.

Roger, meanwhile, has to handle some disappointments of his own doing.  He loses his grandson-watching rights after taking the boy to see Planet of the Apes, which scared the bejeezus out of him.  To counter this, Roger pulls a move only he could make and tries to insert himself back into Joan and Kevin’s life, showing up at her doorstep with a gift for their secret son.  He and Joan share a fantastic scene that reminded me just how good both John Slattery and Christina Hendricks are in these roles, as she tells him he can’t be part of Kevin’s life, since she knows she can’t rely on him.  Joan understands Roger, probably better than he does himself, and knows that while being a father figure is important to him right this second, he’ll change his mind and focus on something else at the drop of a hat– and it seems like Joan may have found a more stable and reliable “better half” in Bob Benson, her new beach buddy.

Of course, the affairs of Don and the rest of clan Draper play into this theme of loneliness, as the lines get even messier for Don, Megan, Betty and Henry.  Betty has rebuilt some confidence alongside her weight loss, a fact that Henry is clearly uncomfortable with– he has a hard time as she is the center of attention– and even propositioned– at a dinner event.  Megan, meanwhile, is starting to feel like a prisoner in her apartment, as Don’s extracurricular activities continue in whatever way he chooses.  Megan is still tougher than Betts, and doesn’t internalize her hostility, but Don hasn’t broken her yet, either.  She seems like she’s starting to break on her own, as she gets increasingly isolated and embroiled in her creepy, swinger bosses at work.

Speaking of broken people, probably the biggest thing to happen in “The Better Half” is the reunion of Don and Betty, who share a night in a cabin on a trip with their son.  It’s a great scene, as Jon Hamm and January Jones create the perfect balance of genuine chemistry and utter toxicity– these two are so in tune with one another, yet so incredibly wrong together at the same time.  Their reunion cannot be a good thing– and the most bizarre affair Don’s partaken in yet– especially with Megan growing increasingly disconnected and Henry getting more jealous and unpredictable.

This episode offered a lot of insight into the various broken and breaking relationships of Mad Men.  It felt like an establishing episode, with many of the characters getting ready to take some big risks, both personally, romantically and professionally.  I sincerely doubt many of these risks will lead to the intended results, but I’m glad that Peggy is the first to fall short of her dreams, if only because it makes her such a trendsetter of things to come.