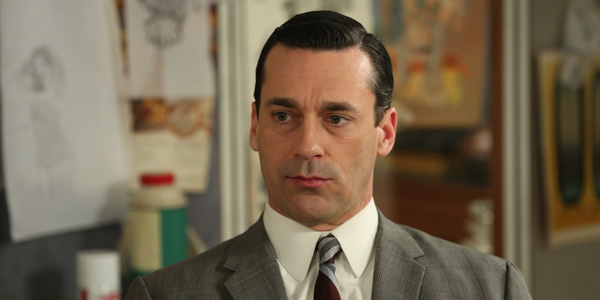 Don begins to feel the repercussions of his actions as a new agency steps into the brave new world.

Remember how last season on Mad Men, Don Draper and his SCDP cohorts struggled week after week with the aggressively changing times around them?  When Draper opted to reject that change and remain on the trail of the dinosaurs, despite his seeming confident return to his old habits, he was in trouble.

That decision is starting to haunt the ad man in a big way, as this week’s episode proves.  After the surprise merger last week, much of “Man With A Plan” revolves around hammering the new SCDP/CGC super-agency into life.  Managers from both firms huddle and decide who stays, who goes and how the sudden symbiosis of these two rival firms into a single entity will work itself out.  And at the center of it all are Don and Ted Chaough, both existing in the very same position with the company… although that’s where their similarities end.  There have been a number of stellar additions to the world of Mad Men throughout its six seasons, but never before Ted have we seen a true foil for Don, a mirror image rival for the ad man. And since it’s Don we’re dealing with, his arch nemesis in-the-making is anything but sinister.

Ted has proven himself a skilled and talented creative director, as well as a decent guy. Had he and Don met years earlier, they may have gotten along, but as Draper continues his dark descent into obsolescence, it makes a beautiful kind of sense that Ted would be a true White Knight (strikingly similar to poor Robert Kennedy, whose assassination punctuates this episode’s final moments).

Don and Ted’s uneasy rivalry see-saws back and forth in this episode, as Don is threatened by Ted’s free form brainstorming, and proceeds to lure the younger ad man into an impromptu drinking match.  Despite his best worst behavior, though, Don is bested once again by Ted, who flies the two of them in his private airplane for a meeting to soothe the nerves of Mohawk airlines.  As Don uncomfortably grasps the side of the cockpit, Ted calmly flies them out of the storm into clear skies, rocking a truly baller pair of aviator glasses while doing so.  It’s pretty clear which one of these guys is the real man with the plan.

Draper has every right to feel threatened– Ted’s open, encouraging managerial style has made him well loved (not liked– loved) by much of his staff, especially Peggy.  Under the short term of Ted’s guidance, Peggy has gone from the perpetually abused number one disciple of Don to a woman who sits in his office and waits for him to arrive, just to tell him off.  And Don can’t catch a break outside the office, either– his affair with Sylvia meets its end this week, after one last, truly bizarre tryst in a hotel.  Draper overhears Sylvia have a fight with Arnie, resulting in him leaving, and takes the opportunity to get her into a private love nest for the two of them in the city.  But his loss of control and discomfort at work cause Don to lash out at his mistress in truly creepy ways we’ve never seen from him.  Usually the submissive, Don degrades Sylvia, demanding her to crawl on all fours, undress for him and many equally alpha sexual demands.  Sylvia plays along to a degree, but her discomfort at this situation becomes more and more obvious, until she finally stands up to him and calls the whole affair off.

That’s the real turning point for Don this week, as he immediately reverts to begging her to stay, switching from icy and dominant to completely emotionally vulnerable.  But she’s done with him, and there’s nothing he can do to change it– it’s out of his control.  Just like Ted, just like the office… There is nowhere Don would less like to be than a situation in which he doesn’t have control.

While this was a Don-heavy episode, there’s lots of other great side stories going on.  No one seems to be taking the merger harder than Pete, who begins becoming increasingly paranoid that he’s being muscled out of ownership of this hazy new company.  His fit over not having a chair at the partners meeting– especially after de-placing a secretary who is then given a new seat thanks to Ted– makes his paranoia feel even more pathetic, and his situation only gets worse as his mother’s dementia worsens and he is forced to keep her in his bachelor pad.  Pete still has more to prove than most of his colleagues, but despite his progressive beliefs, change tends to make him just as ugly and sad as them.  I tend to think his fear of being kicked out of the band as it were started all in his head… but after how much he carries on about it, those unfounded fears may become something more real.

Joan, meanwhile, is remaining the rock of the office during this tumultuous transition.  But when an ovarion cyst has her doubling over in pain, professional brown-noser Bob Benson is nearby to come to her rescue.  The two share a wonderful scene in the hospital waiting room, as we get a slightly better look at who Benson is.  While Ted is the best new character this season, Benson might be the most intriguing.  Every action he takes seems to have two explanations– he’s either a kind, good person… or he’s a master manipulator, playing everyone like a pawn to get what he wants.  His treatment of Joan seemed genuine, and I hope he really did this out of compassion (or maybe passion?) for her… but his good deeds being unknowingly paid back as Joan saves his job from the chopping block shed a possible new light on the whole thing.

There’s an interesting positivity to the new characters introduced this season, and that fresh new attitude seems to be creating as many conflicts as converts.  When people like Don or Pete or even Joan have turned so cynical, so soured by the world, it makes sense that the most dangerous thing out there is someone with a completely different more upbeat perspective.  Positive thinking can be a revolutionary act– and Don Draper is realizing he might just be getting overthrown.