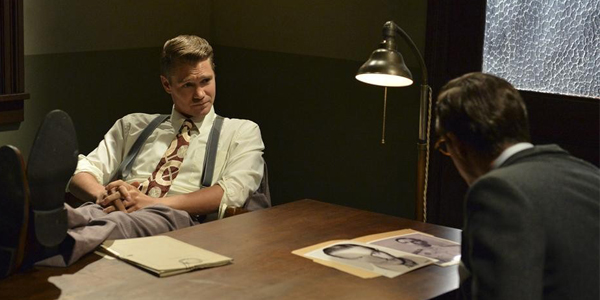 Jarvis is under the hot lights in the newest installment of Marvel’s Agent Carter.

Over the hour Carter was able to find the missing Stark tech leading her male SSR agents to recover them. Most of the time spent was giving a look at the inner workings of Jarvis, and his new relationship with Carter. When we met with the cast at SDCC, they were excited that the show was compact, a show with no filler, but with each episode that is all it feels like.

The show was created to fill the space between the fall and spring seasons of Agents of S.H.I.E.L.D., and that is all it is doing. With the exception of the Cap flashbacks in the first episode, the connection to the current Marvel Universe is minimal. The mentions of Stark are the only thing that really ground the show in the superhero world, but instead of a prototype of power sources and spy tech we got a muscle contractor today. Connections to Tripp, nods to Fury, just something to make this feel like it is relevant to the Marvel world would make the show worth watching, because right now it feels like the first real filler. It is giving backstory to the big names we know from the comics and films, but do they need all the back story, or could this 8 episode  story be told just as well in a 2 hour special event TV movie?

Agents of SHIELD had a slow build to win back the audience, and the tie-in to The Winter Soldier helped a lot, but Carter won’t have either of those, so if the pace does not pick up, it might hurt more than help push the Marvel world forward.