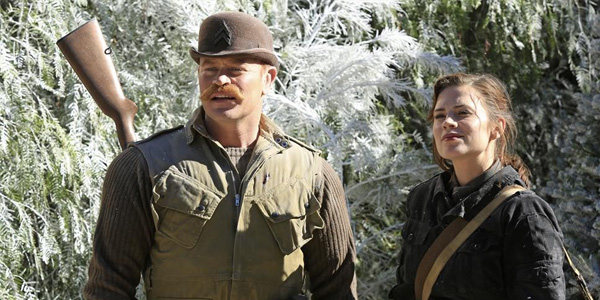 Peggy and the Howling Commandos take on the Russians on this week’s Marvel’s Agent Carter.

Finally the show picks up, delving deeper into the characters an adding some great action. This week Peggy, after a talk with Jarvis, steps up to be more than the coffee girl at the SSR. She is fed up with being pushed down, and marches right into a meeting. Cracking a code that a room full of guys could not put her in the sites of Dooley. Peggy is able to gain some respect and is sent on a mission after promising to deliver the Howling Commandos as backup.

The mission is to Russia where the SSR thinks that Stark is selling gadgets to the Russians. Arriving in Russia Peggy unknowingly enters the training facility of her next door neighbor Dottie, finding another little girl waiting for them. Dum-Dum offers a friendly hand, but the girl stabs him and kills one of the team. Peggy realizes the dangers and orders an eval of the facility. Agent Thompson is following orders until the bullets start to fly, causing him to freeze up. The war hero turns out to be a coward, and Peggy is the real hero. For the first time in the show, in her natural element, Peggy is the hero we all know her to be and the men see it too.

Dooley is also on there trail of the gadgets and realize he is being played for a fool. He talks to Jarvis, telling him he knows Stark is being set up and just wants to find the truth. Dottie is also busy while Peggy is away, flashing back to her training and breaking into Peggy’s apartment. She finds some of the pictures of Stark’s gadgets but misses Cap’s blood.

The show’s action this week and connection to Cap made this the best so far. All of the build up had to be there to get to this point, but there might have been too much to keep fans interested in the show. Was four episodes of her not getting her due, running around behind the SSR’s back worth one great week of TV? Some will say it’s because the lead is female, but it has to more with the storytelling than the characters. Look at Alias, same formula, done much better. Agents of S.H.I.E.L.D. also suffered from this in season one, thankfully this show is only 8 episodes long. Three more weeks, will it be worth the wait?