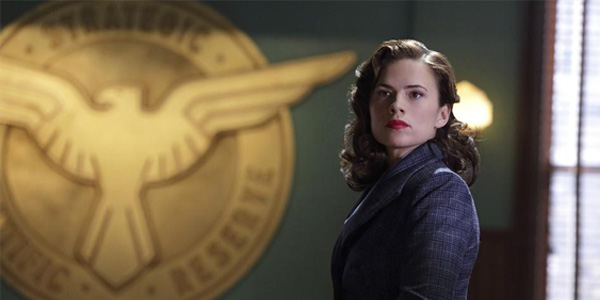 Marvel’s Agent Cater picks up where Captain America: The First Avenger left off. A world without Cap, and the birth of S.H.I.E.L.D.

The 40’s came alive in the premiere of Agent Carter, with enough action and comedy to keep some Marvel fans interested for the two hour opening.

The two hours showed off the world post WWII, a place where women are expected to bring coffee to the guys, and everyone wore suits and dresses. Hayley Atwell as Carter is a perfect fit, but even all her action and great outfits could not keep the attention of comic fans. The show felt like a 40’s version of Alias, but not as exciting. As a comic and Marvel movie fan it was good to see the nods and connections to the modern world like looking for the little hints that Hydra was still alive, and the man J.a.r.v.i.s. was based on made the 2 hours worth the watch.

But those little things were not enough to make it feel like a must-see show. Some of the acting was over the top, feeling more like caricature of the time period. Those aspects of the show overwhelmingly took viewers out of the magic of the show. The guys were bumbling, making Carter look like a super woman, and while she may be the hero, she came off almost too perfect. If this show was running side by side with Agents of S.H.I.E.L.D. it would most certainly fall flat, but filling in for the winter break gives it an edge. Hopefully more connections to the present and a few guest stars will improve the show.

The question is, with 6 more hours of Carter to go, can it up the pace without losing viewers?