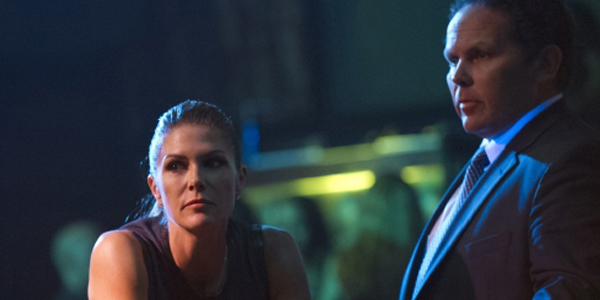 The girls come out to party and take down a possible serial killer, can they stop him before he takes down one of their own.

This week the team’s target is Ian Murphy, an rich kid who seems to have a thing for the ladies. Murphy is dating multiple women, and using his talents and money to change himself to fit the woman. The team start to look into him and find he appears to be using the internet to stalk women.

Zoe, Carter, and Shaw decide to go undercover to try to get Murphy’s interest and take him down. Carter is the one who gets his attention and after a first date they find out Murphy is innocent, just a slight stalker, and he needs protection. Murphy as a teen was involved with a rich girl and her father paid him to take off. What Murphy did not know is that he has a son, the team help reunite the two and set plans into motion to get the too back together.

Meanwhile Root is on the move, putting together a plan to escape. The Machine warns her that Hersh is coming for her, and she takes out the whole facility to escape. She wounds Hersh, but the Machine won’t let her kill him.

With Root on the loose and a new group also tracking people down the crew has a lot on their plate this season.