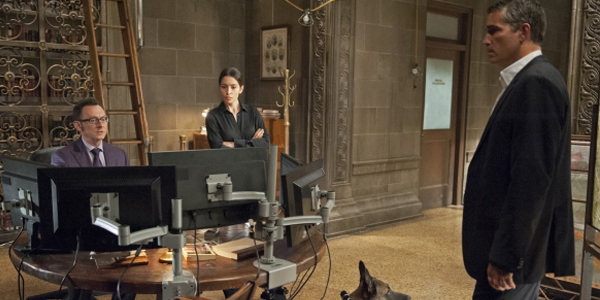 Can the team save a woman from being convicted of killing her husband? Or is she really guilty?

This week’s subject is a woman who is being accused of killing her husband. The couple was a legal power team in New York, one a prosecutor one a defense attorney. Vanessa is taken into custody by the NYPD just before Reese and Shaw can take her in and figure out what is going on. Vanessa is being accused of killing her  husband Jeremy, even though she was the one who called in his disappearance and death. Vanessa is more than she appears to be, escaping custody and figuring out who set her up for the murder. When Reese finally gets to her she has put together a masterful plan that impresses him.

Reese returns to the safe house with Vanessa where Finch and Carter are waiting to find out what really happened to her husband. The trio decide to help her get away before the people who killed her husband comes for her. They find out too late that she and her husband planned it all to get to a bank account with 20 million dollars. With her husband still alive, Vanessa figures out that he double crossed her, and she wants revenge. Although the team usually tries to stop crimes after being played Reese allows the couple to take each other out, walking away from the whole ordeal.

We also find out that Carter’s new young partner is not all that he seems. He meets up with one of the HR enforcer to give an update. Will Carter’s number be coming up soon? And with all the drama with Root last week, where is she?