TV Korner: Seriously, You Should Be Watching FARGO 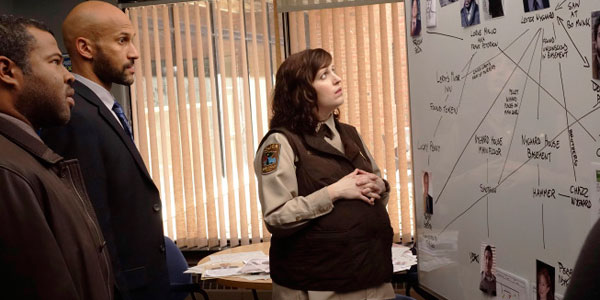 FX’s Coen-inspired miniseries continues to be one of the best hours on television.

A few weeks back, I wrote about Fargo, the FX miniseries based on the classic movie by the Coen Brothers.  It was right around the time that Oliver Platt’s Stavros Milos (brilliantly) defined this series as a sequel as opposed to a re-telling, as he discovered the hidden cache of money buried in a snow bank by Steve Buscemi’s Carl years earlier.

But while the new show is most definitely a new story set later in that same universe of ‘Aw Geez’ Earthiness and brutal, dark-souled violence, it continues to echo the film at the same time.  Last week’s “The Heap” certainly did its part to parallel what happened in the past, as we jump one year forward in time to find Lester Nygaard enjoying life as a self-made alpha male, Gus Grimly fulfilling his destiny by becoming a mailman, and Molly Solverson becoming pregnant, while still on the police force, just like Margie Gunderson before her.

Seriously, though– if you had told me nine weeks ago that Margie wouldn’t be my favorite strong, competent, pregnant police woman in Minnesota, I’d have laughed at you.  But Molly has not only eclipsed that character entirely in my eye, but become one of the absolute most well-defined, rounded and pragmatically feminist characters of all time.

Molly is smart, determined and focused, far stronger than many of the men around whom she both works and lives.  We meet up with her again wondering if maybe a baby on the way would have dulled her edge and her drive to solve this year-old case.  And it has a little, maybe– it’s not the only thing she’s focused on any longer, thanks to her new family with Gus and Greta… but as soon as word reaches Bemidji that Lester’s past is catching up with him, she is immediately back on the case, full force, and you just know she’s not going to let this go until it’s over.

While Solverson may not be a super human, Allison Tolman might just be.  She has been incredible throughout the course of this series, authoritative and capable in the face of incompetence, brave in the face of fear and razor focused in a laid back town where no one else really wants to ruffle any feathers.  Tolman hasn’t had too many credits on her IMDB page, but after this role, it will seriously be a travesty if she doesn’t become a serious force among great young actors.  She’s that good here.

On the opposite side of the coin is Billy Bob Thornton’s Lorne Malvo, who at this point has evolved into a full-on Coen Devil.  See, the Coen Brothers have always LOVED including the Devil as a character in their movies, and I’m glad (though not too surprised) that showrunner Noah Hawley picked up on this and added a Coen Devil of his own to the mix in this series.

When we see the year-older Malvo, gun in hand stand up in an elevator shaft filled with dead bodies, as Lester frantically runs away, the killer promises to see his former friend “real soon.”  His face draped in shadow, the blood stains of Malvo’s latest victims form horrific, bloody wings stemming off his shoulders, turning him into an ominous dark angel in one of the single most strikingly cinematic shots in a series that’s been filled with them.

Thanks to the dynamite cast, I had some hopes for Fargo, but honestly, I never expected it to be THIS good.  I know the “each episode is like a little movie” line is cliche as hell, but it’s so true here, it’s hard not to say.  The production value, the sharply defined and fully rounded characters, and even the little nuances like the riddles shared between many of our heroes and villains all merge into one amazing story, one that I feel will become more and more satisfying each time I return to Bemidji.

If you haven’t given this series a look yet, I implore you to do so– You can stream all nine episodes thus far on FX’s website.  “A Fox, a Rabbit and a Cabbage” marks the ninth episode in the series, and next Tuesday’s “Morton’s Fork” will bring everything to a close.  While I can’t talk at all about what will happen, I found the ending to be satisfying both thematically and emotionally, and it made me want to rewatch the entire series from the start, as soon as possible.  But we’ll get into that next week…