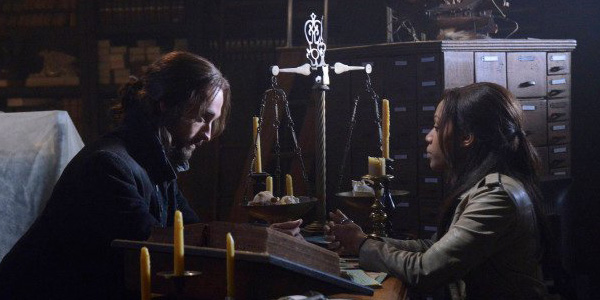 Going to bed might not be a great idea after this week’s Sleepy Hollow. Nightmares are the theme of this week’s show and Mills has to get past her own if she has any hope staying out of the asylum.

The creature of the week is the Sandman. He comes to those involved with the sisters and their story, causing people to go insane and take their own lives. At the start of the episode it felt like it was all going to be part of the modern world and the sisters, but the creators were able to work in some Ichabod backstory about half way through the episode.

The Sandman is really and old tale told by the Mohwak tribe to children, instilling the virtue of helping one’s neighbor. The Mohawk though did not call this creature the Sandman, it was known as Rokaronti to the tribe, and he would come to those who were guilty of standing by and not helping those in trouble. Crane knew about the creature from his time getting to know the shaman of the Mohawk tribe in the colonies. In the present Rokaronti attacked those who left Abbie’s sister Jennifer to rot in an asylum, but it is unclear where the creature came from and who sent it. We get some more back story on the sisters, how they were found, how long the Faceless One had them in the woods, and what caused the rift between the two. Once Abbie faces her guilt Rokaronti is destroyed. Abbie tries to make it right with Jenny, but when she goes to the asylum she finds and empty room and a sister on the loose.

The only weak spot in the the show is the acceptance of Crane and these creatures into a normal world. It almost feels like there have been some scenes left on the cutting room floor that might make the show much more solid. The core of the show continues to build on the relationship between Crane and Mills, while bringing fun historical flashbacks, and some great pop culture*.

*Any show that can work in a Back to the Future reference is amazing.