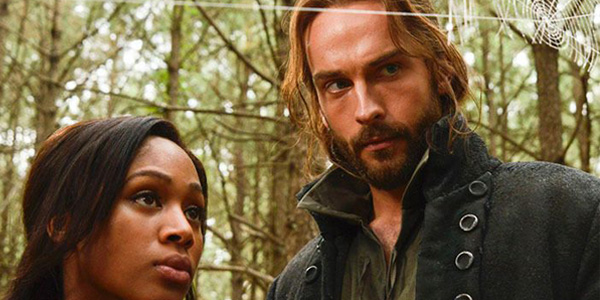 Crane gets new digs and another Horseman comes to town in this week’s Sleepy Hollow.

This show may be slightly out there, but it is fun to watch. Putting a twist on American History is one of the charms of the show. As a history teacher I have always liked telling my students about the lost colony of Roanoke. In the 1500’s the first colony in Virginia disappeared, and no one ever found out what happened to the people who lived there. This week’s show gives a their answer to the mystery, although not plausible in our world.

One of the Horseman, Pestilence, rode into the colony of Roanoke and infected the residents. Their only way to save themselves was to follow the ghost of the first American born child in colonies, Virginia Dare. She lead the colonists to a little island in the forest, and their they have lived for the last 400 years. Now in modern times when Crane is settling into the Sheriff’s old cabin Mills get a call of about lost boy. It turns out the boy has been found in the woods, with a strange disease that infects the residents of modern day Sleepy Hollow.

Crane is the only one who speaks Middle English and learns were the boy is from, he is able to track the boy’s movements in the woods and find the lost colony. Mills and Crane talk to the colonists and learn the island is keeping Pestilence at bay. The only way to stop the spread of the disease is to return the boy to his people. Once there the colony disappears and all infected are cured, for now the Horsemen are stopped.

The Captain is also covering Crane’s cover story, by making sure the other cops on the force stop looking into Crane’s life. He is hiding something and it may have something to do with Capt. Irving’s family tree, but only time will tell.