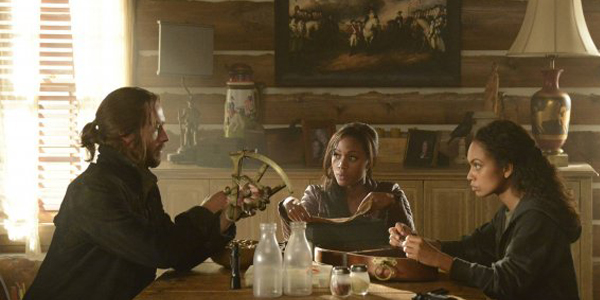 The door to hell is opened and the Mills sisters have to work together to stop the demons from using it to enter Sleepy Hollow.

Every week this show continues to build a rich world, making it one of the shows not to miss this fall. This week audiences are treated to a history lesson about the Boston Tea Party and the Mills sisters reunion. The plot holes that have been an issue the past few weeks are starting to be filled, making the show easier to lose yourself in.

Jenny Mills on the loose helps to bring into focus some of the underground issues facing Sleepy Hollow. Jenny reveals that it was Corbin did not only take Abbie under his wing, but Jenny too. While Abbie was brought up in the law and mentored in the real world, Jenny was trained to fight and discover the supernatural. The two make an impressive team, add to that Crane and they are almost unbeatable.

Crane and Abbie are the not the only ones chasing down Jenny, there are also dark forces on her tail. It turns out the Hessians are still alive and well, trying to carry out their mission from Crane’s time. They also try to track down Jenny to get an artifact from the past a sexton. Crane and Abbie are able to find her first and after learning all about Jenny’s past they find out the sexton is a map, which is quickly stolen by the Hessian and his crew.

They Crane and the Mills sisters track them down to an old church, where they are trying to open a portal to hell and release the first of 72 demons on Sleepy Hollow. They team is able to stop the Hessians, but they learn that there is someone there calling the shots, they think it is the faceless one, but it has to be a living person who knows how to use a cell phone.

This show is starting to fill in the blanks like how Crane can navigate in this modern world, he has a photographic memory, and that the chief still does not trust Crane. Next week it looks like Crane may finally get some new clothes, and a face from the past may take out the whole town.