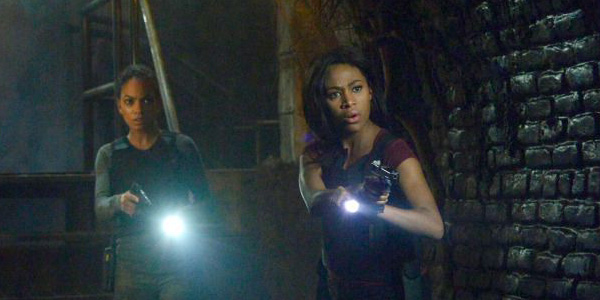 This week the true identity of the Headless Horseman is revealed, and he has a shocking connection to Crane.

The Horseman in this series has been thought to have been a demon, but it was revealed this week that he was just a man before becoming the agent of death for Moloch. The origins of the Horseman comes out during his interrogation by Crane, and turns out to be much closer to home.

Crane flashes back throughout the show to his time before Katrina and him were married, a time when she was promised to another, Crane’s friend Abraham. The two worked as spies for the Patriots making plans and delivering messages in dangerous territory. The friendship ended when Abraham found out it was Crane who had Katrina’s heart. In the middle of an important mission Abraham stopped for a duel giving away the pairs position to the Hessians. Abraham is shot in the gut and Crane is forced to leave or suffer the same fate. That was the last time he ever saw his friend until now. It turns out the Hessians take the dead on the field of battle, those with hate in their hearts and turn them into one of their own. The bond between the two goes much deeper than the bold bond they shared. That connection has been distracting to the Horseman, trying to take down Crane is taking his attention away from Moloch’s goals and slowing things down.

While Crane is integrating the prisoner the rest of the town is in danger. Abbie send Irving to track down Jenny and catch her up on the events of the night. When he does find her he is pulled away by a break in at and antique store. Jenny has a connection to the store and tags along, and because of her expertise she is able to help Irving figure out the target of the robbery, a ancient artifact that could break the Horseman out of his cell. They also figure out that the Hessians are trying to take down the power grid to take out the UV lights holding the Horseman at bay. Meanwhile down in the crypts Abbie and Crane are using Brooks to talk to the Horseman, but they learn the hard way that he can’t be trusted. Even though he helped them capture the Horseman, he is a tool of Moloch and smuggled in the artifact helping to to free the prisoner. The Horseman and Crane duel and that is when he realizes the true identity of the Horseman. He is shocked and realizes that Katrina is being kept alive for Abraham, once he completes his mission.

The team of the Mills sisters, Crane, Irving is getting stronger. It was good to see Irving work with Jenny this week, they make a rather dangerous team. There is still something Irving is hiding, he seems to be too accepting of all the events and able to handle everything that is going on rather calmly. There are only a few more episodes this season, so will the team keep the forces of evil at bay or will the town go to hell?