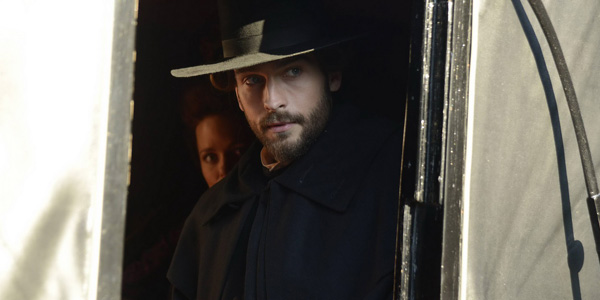 Entering a haunted house on Thanksgiving may change Crane forever. What did he find inside the old house? Find out in this week’s Sleepy Hollow.

The episode focuses on a house built during Crane’s time that has captured a wealthy woman, Lena Gilbert, in the modern times. Crane and Mills are sent by Irving to investigate the missing woman, and when they arrive they are locked in the house.

They are blocked at every exit and are forced to search the house for the woman, and a way out. They search the house and fine Gilbert’s body guard beaten and dead, and signs that the woman did not go down without a struggle. They also find one of Katrina’s books, along with a letter proving that she was in the home after Crane’s death. They find Gilbert in a closet being held by branches and thorns. They are able to cut her out, and notice when the branches are cut or broken they start to bleed. They try to find a new way out but once again they are blocked, but soon realize they are not alone in the house. There is a tree monster that is trying to kill them, that has taken over the house. It killed the original inhabitants and anyone who dared step on the land. The trio find secret passages in the wall, and try to escape but are separated. Crane tries to protect Gilbert, but she is taken by the monster.

Mills is seated from the group, and is lead around the passages by a ghost of one of the old residents. She is taken to a room, where she has a vision of the past. It turns out the home was protected by part of Katrina’s coven, and she went there for help. She came to the house to help with the birth of her son, something Crane had no idea about. When Mills find Crane she tells him of the visions and what happened in the home. He is shocked and even more motivated to track down the monster. They locate Gilbert, and start to take down the monster in the basement of the home. The ghost helps Mills find a way out, but Crane is not ready to leave, not with out destroying the monster who tried to kill his son.

There are also some interesting scenes with Irving and Jenny, who have a moment, but are interrupted by Irving’s ex-wife and daughter. We get a glimpse into Irving’s life before Sleepy Hollow, and get the feeling there is much more to the ever accepting Captain.

In the end Mills and Crane share a drink and learn that their lives have been intertwined for centuries. The ghost who helped them in the house turned out to be a ancestor of Mills. What happened to Crane’s child and wife will surely take up a lot of time for the rest of the season and maybe next.