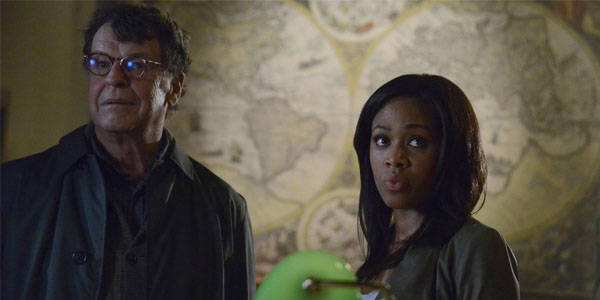 The Sin Eater has returned and this time he has to help Mills and Crane take down a Golem.

We get to delve deeper into the Crane family this week on Sleepy Hollow. Crane is being a grinch when Mills comes to visit, and it all has to do with Crane’s son. Mills is surprised to see Crane getting a visit from Henry, the Sin Eater, who is coming to help him contact Katrina on the other side. Henry warns Ichabod that this trip may not work the way he wants, and will be cry dangerous, but he is on board. Henry starts to choke the life out of Crane lessening the barrier between the living and the dead sending the out of time man to see his wife.

When Ichabod arrives in limbo he is in a church, where his wife is lighting a candle. Katrina is surprised to see her love in this setting. To remind her of what she has lost she comes to this place every day to light a candle for her son, whom she had to give up at birth. She tells Ichabod the tale of their baby, who had to be hidden from her coven. She tells him she named him Jeremy after his father’s grandfather, but left him in the care of the pastor at this church. Their visit is cut short when a monster resembling the baby’s doll smashes in the the room, sending Crane back to the world of the living. He tells Mills and Henry what he has learned and the team head out to the historical society to find answers. Henry throughout the show tries to leave, pulling away from the Crane and Mills, but finds their work to calm his soul, which is usually plagued by the sin of others.

They learn that Jeremy was orphaned at an early age when his home was burnt down around him, and spend time in an orphanage. They also find out that the woman running the society was a member of Katrina’s coven, and when they go to question her they find her smashed inside her car. Crane was not the only one to return from Limbo. After going through more records they learn that the woman at the society visited carnivals a lot over the years, looking for a group calling themselves the 4 that speak as 1, also part of the the coven.

They track down the last of the coven and Crane learns the last piece of his son’s puzzle. The coven hunted the boy, because when he was at the orphanage he created a Golem, who protected him form any who tried to hurt him. He inherited his mother’s magic, and without guidance and protection from his parents, he grew to lash out. The coven banished the creature to limbo, and buried the boy alive. Crane wanted more answers but it was too late the Golem was there and took out the last of the coven. Because Crane’s blood was also Jeremy’s he could defeat the creature, releasing the hate his son had all those years ago.

We also got more of a look into Irving’s life with his ex-wife and daughter. While looking for answer back in New York city, he was confronted by Moloch’s people, and his daughter’s life threatened. Crane also had a visit from the Moloch this week, warning him he would free his wife and give her over to the dark one.

This is the last episode before the holiday break, with 3 hours left in the season there are a few things that could come into play before it is all over. One of the biggest questions to come up after this week could be even though the witches told Crane they buried the boy, they did not say they killed him, only slowed his heart and breathing. Could Jeremy awaken like his father, and will he be on the side of good?