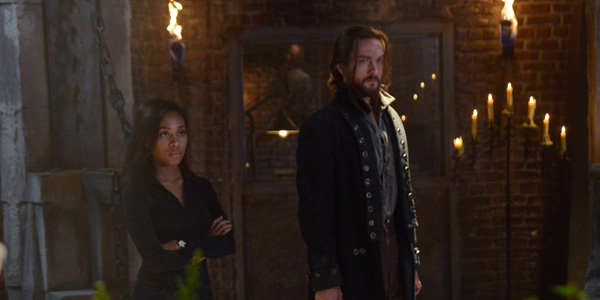 Sleepy Hollow returns for its second season on Fox with a fun opening that makes for an exciting kick off.

When the season ended last year on Sleepy Hollow, there was some worry that the witnesses would be separated for part of the second season, with Lt. Abbie Mills trapped in purgatory, and Ichabod Crane out in the real world. Thankfully by the end of the season opener the duo was back together.

The show opened a year after the events of the finale, with Crane and Mills both mourning the loss of some more loved ones. They also seemed rather prepared for fighting Team Moloch, showing off some amazing teamwork against the Headless Horseman. They were cool and collected ,and Crane seemed very in control, until he had a very Back to the Future moment, losing the memory of the last year.

The amazing action of the first 15 minutes or so of the show was all an illusion, created by Henry, or as he is now known the Horseman War. He was using their minds to find the key to purgatory, and now that he had the information he needed he was off to releases his master. The key in question belonged to Benjamin Franklin, who was also a teacher of Crane’s back in the 1700’s. Most think of Franklin as this great man, but to Crane he as a arrogant pain in the rear. Nonetheless, the key was hidden in town and Crane along with Jenny have to track it down before War finds it.

Mills also has to try to stay alive in while in purgatory, and when Crane and Jenny finally get the key and open the door to rescue her, another Crane is there trying to keep her. She has a tough choice to make as the two Cranes fight over her, but when one calls her “Lieutenant,” instead of “Leftenant,” she knows its not her Crane.

The show flew by this week, full of action and suspense. The relationship between Crane and Mills, in the real world or the illusion world, is the core of the show, and this week it just all clicked in place.