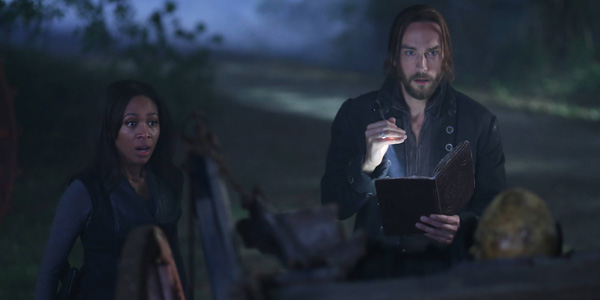 Franklinstein made his debut on Fox’s Sleepy Hollow this week.

Mills is back in the real world and Crane is focused on saving Katrina, but Henry has other plans for the duo. What the two witnesses don’t know is War has a new body, so they will not only have to face Death, but also the armored warrior of War.

This week opens with an all new status quo in Sleepy Hollow. A new police captain is not ready to give Mills the room to explore the weird happenings in town. Sheriff Reyes is focused on cleaning up the mess Irving crated, locking down Mills and freezing out Crane. The pair have to work outside the law even more, and it looks like it they might be on their own. The new Sheriff finds Jenny in the records room with a bag of guns, giving her the reason to lock up Jenny. Meanwhile we get an update on Irving, locked up and awaiting trial. Mills convinces him that if he pleads insanity, the hospital is easier for them to visit and talk than prison. So Irving enters the plea, but once again the new Sheriff is right there to make sure he is not faking and subjecting him to all kinds of treatments to keep him sidelined.

The Witnesses are on their own this week, looking once again to Benjamin Franklin to help. Crane remembers a story of a Kindred a creature sewn together from the body parts of the dead. The creature was created but never brought to life by the colonial inventor. Franklin hides the body in the tunnels bellow the city, waiting to be used if needed. They are able to track down the body, but decide to add a little more power to their creature, Death’s head. Using Katrina’s coven’s spell they bring to life their creature, sending him after the Headless Horseman. While the creature, nick named “Franklinstein”, takes on the headless one, Crane sneaks into the barn where Katrina is being held, but he instead of rescuing her he leaves her.

She tells him that while being captive she can spy on War, to make sure Moloch does not get into this world. She can be their inside woman, feeding them info on the Horsemens’ plans. And although he can’t bare to leave her, he realizes it’s the best plan.

The show ends with Irving getting a new lawyer, one who makes him sign a contract. The Lawyer turns out to be Henry, and his pen pricks Irving’s finger leaving a few drips of blood in his signature. Will Irving become and agent of Moloch or do the Horsemen now have their own inside man?