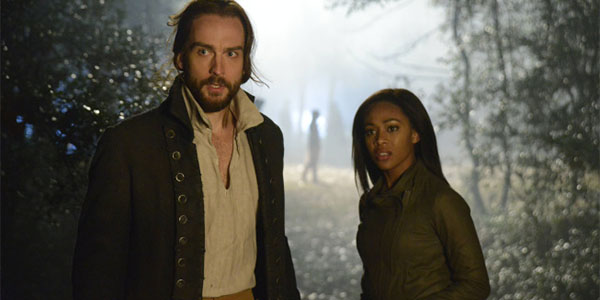 The first season of Sleepy Hollow ends with a twist that surprised many, leaving fans with a long wait for season two.

The first hour of the show is spent in search of a map created by George Washington. As Crane starts to find more clues in the bible, Mills is visited by brooks. He warns her that the map will allow Moloch to win and if she gives it to them, she will be safe. He escapes but leaves doubt in her mind about her parnter. Crane and Mills have to enlist the help of the sin eater, Henry, to find the map. They learn from a message in the bible that Washington was resurrected 4 days after his death, using the knowledge of the after life to create a map to purgatory. This map is a tool Moloch can use to win the war, and has to be protected. The trio figure out that the key to finding the map is in the prayer beads from the priests who the Death killed in the season opener.

Henry tries to get the information from the beads, but they are protected and is only able to see glimpses of the map’s location. They are attacked by demons but able to fight them off, and figure out where the map is hidden. Mills asks Henry if there are stories about the witnesses betraying one another, and he tells her there was a story, although it was left out of the bible.

While the team is searching for a way to stop Moloch, Irving is on his own to deal with the fallout of last week. The police are investigating the events that left two cops dead, and the beheading earlier in the season. When they start to look into Macey for the crimes, he gives a confession telling them that he committed all the crimes. With Irving locked up the team is one man down for the rest of the finale.

They learn that Washington’s gravesite for the public is a fake and he is really buried outside Sleepy Hollow. The use the clues from the beads to find the tomb and find Washington’s body and the grave. As they are reading the map Brook’s in his new form is attacks them. Henry and Abbie are able to stop him long enough for Crane to figure a way out of the tomb. Crane is forced to make a difficult decision destroy the map or free his wife. He chooses to destroy the map, except he has a photographic memory and as the first hour closes he starts to recreate the map from his memory.