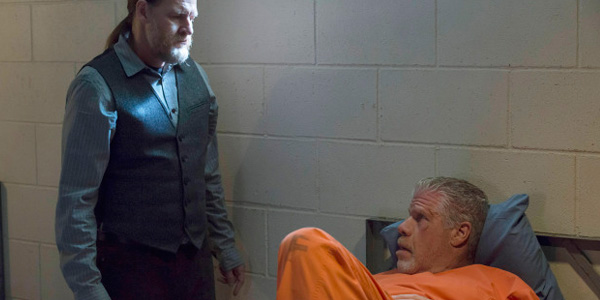 The residents of Charming have a lot going on this year. The club has been shaken up, some have returned some have left, and has some incredibly intense moments.

The leadership of the SAMCRO is on rocky ground thanks to Jax as president. Over the last five years many fan have wanted Jax to step up and take the reins of the club, but over the last year Jax has shown he is not the leader everyone expected. He keeping everything close to the vest, and not allowing the club to vote on issues. In his rise to power, making all the back room deals has left Jax in a world where he is more of a king than a president. His choices have left Tig’s fate up in the air, Juice without a home, and Clay on the road to being shanked in prison.

The season premiere starts and ends with a bang. We are given an update on all the characters on the show, their new roles and some new locations.

Jax and Nero are looking to expand their business and branch out to a new home with a new madame thanks to incidence at the docks. Lyla takes a job in torture porn and shows up beaten and bloody, sending the club off on a mission to find the guys who did this to her. Nero warns Jax that if he is going after these guys he has to get permission from the local crooked ex-cop who runs everything down at the dock, but once again Jax goes with his own plan. It ends with a shoot out and an introduction to Peter Weller’s crooked cop. To smooth things over Jax and Nero agree to go into business with a new madame, and Jax even takes a sample.

Bobby on his own and considering going nomad, he only needs 3 more to join him so he can leave Redwood original. He is marking up a map of the surrounding states for a place to end up, but will he leave his club for good or will he be brought back into the fold as the season progresses.

Juice returns after his falling out with Jax and the club thanks to his actions with the cops and killing a club member. Though new VP Chibs wants him dealt with, Jax does not want to lose another member and convinces Chibs to give him a beating and a chance to prove he belongs at the table.

And even though actor Kim Coates told us Tig was on the chain this year, he starts off a a wild man in the season opener. He drowns a guy in urine, peeing on him, puts him in a cage and tosses him off a dock watching the body go under the water to a lovely version of Otis Redding sitting on the dock of the bay. Not to mention Tig is still on Pope’s hit list from last season.

Tara and Clay both start off in orange jump suits this year. Tara is holding strong and shows why she is Jax’s old lady, not taking crap of anyone in prison. though she is not one to be messed with in jail. Clay makes a deal after looking into gen pop and seeing his death as a reality. Right now it’s unclear if he will really turn rat on the club or if this is just a move to save his own skin for the time being. While the pair are in jail ex-marshall Lee Toric makes a few visits, and we start to see behind his curtain, and it is nothing compare to what fans will learn as the season progresses.

The biggest moment in the show hit close to home for many, in the country when the show ended with a somber song and a school shooting. Throughout the whole episode we see a young boy who has connections to Nero’s crew pop up from time to time writing in a notebook. The boy looks a lot like Jax, but it’s not until the final moments when we get to see what was in the boys bag and notebook.

Sons once again pushes the boundaries, and take fans on an intense ride, and having seen the next few episodes, this is just the beginning.