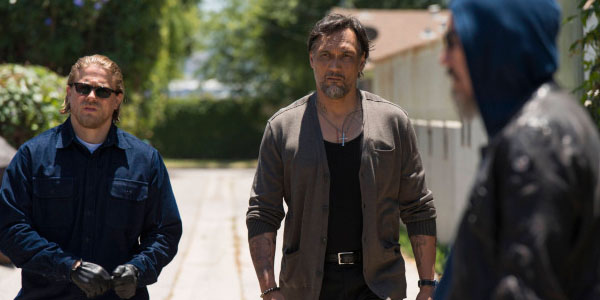 This week Sons of Anarchy picks up right where it left off in the premiere. A community dealing with school violence and a club at odds.

The connection to the club is made clear in this episode and Jax spirals even deeper in this his own world. Jax is making decisions all on his own, and it is impacting the club both as a whole and individually. It seemed when the show started most of the guys fell in line and followed orders, but with Jax’s move for power over the last few years it has effected how everyone else treats the leadership. The biggest example this seasons is Jax’s inability to keep a VP. Last season we saw Bobby walk away, and there is a growing tension this year between Chibs and Jax. Jax is also trying to get out of running guns moving to girls and weed, but the Irish won’t go down without a fight.

Tara’s journey is also taking a turn this year. She is released from prison to a not so warm welcome from Jax. It is easy to feel the tension and mistrust between the once loving sweethearts. Their relationship has gone through a lot of changes and it usually results in them becoming closer, but this year it feels like they are moving farther apart. Tara is still preparing to leave working with the club lawyer and writing down everything show know about the club and her life with them.

There is also a good deal of tension growing between Nero and Jax. Finding out that one of his own crew members had a part in the school shooting left Nero in a hard place, and when all is said and done he was willing to kill one of his own to protect Jax and SAMCRO. But when it comes to killing the boy’s mother Nero unwilling to kill her because she is a civilian with other children, but Jax once again makes and executive decision, and strains an already trouble partnership.

Lee is also dragging everyone down his twisted rabbit whole, trying to turn everyone against each other. He is willing to forge signatures and lie just to take down the Sons. And anyone wondering could he get worse, just wait until next week.