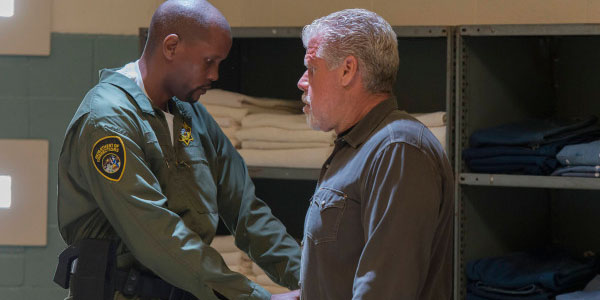 SAMCRO continues it downward spiral this week. The club seems to be moving further away from Jax’s vision and it looks like the Redwood Original might be prime for a coup.

Not all is as it seems as this episode leaves fans with quite a cliff hanger taking one Son off the chopping block and putting up another. More is brought to light about the school shooting and it is looking more and more like the blame will be laid right on the club’s front door. Toric is working with DA Patterson to bring it all down on the Sons, even thought they were not directly involved with the shooting. Toric also starts to unravel even more accidentally killing a hooker in his hotel room, with the DA right outside. To get more info about the shooting he tortures a few of the Biz Lats working for Nero with some tactics that might Vic Mackie turn his head. Toric is a man on a mission and if 5 seasons of SOA and the Shield have taught us anything, those who are willing cross the line never come back the same.

The ladies of the club also are making their own moves. Tara continues to distance herself and protect her kids, staying clear of the most of the club business. Wendy however is making a move to get back in with the club. Turning to the one person in the world no one ever saw coming, Gemma. Gemma is so focused on Tara and the boys she has not idea that Wendy is playing her in some way. Wendy’s endgame is unknown, but I’m sure whatever it is, it will hurt Jax and Gemma.

With all the problems this season we finally see the guys in the “chapel” talking about club business. The table is much smaller with only 6 members in leadership roles, though it does not seem to have the same power it used to thanks to all of Jax’s secret plans. They decide to get Cara Cara back up and running as a new source of cash to replace the guns that are on the way out. It also looks like Bobby may not be looking to go nomad as much as he is looking to take the power away from the Teller family to finally right the ship.

In the end though this is Clay’s day in the sun. We watch as he is set up like Opie last year, only to find out Jax still needs him. To get out of guns, Jax has to use Clay and works out a deal with August Marks, Pope’s replacement, to keep Clay alive. Clay will live and be protected by Marks’s crew as long as he kills the White Power leader of the yard. Clay takes the deal but we learn that keeping Clay safe comes at an extreme price– Tig’s life. Will Tig survive the season or is his number finally up?