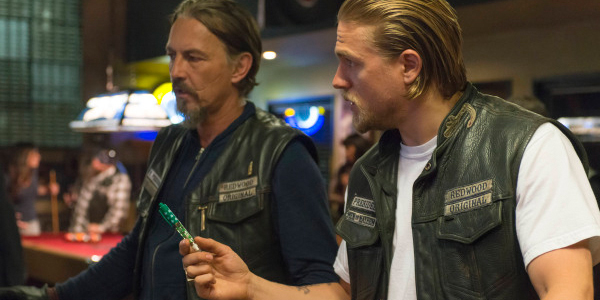 The club is still reeling from last week’s loss to the Irish, and the hits keep coming.

For the last year Jax has been conducting business behind SAMCRO’s back and this week it all come crashing down. Jax has been trying since day one to get the club out of guns, but the guys have shot him down at every turn making the young president strike out on his own with disastrous results.

Jax, without consulting Chibs, took Mark’s offer to take over guns right to the Kings. What Jax did not know was Galen was right there with them to refute every thing Jax said, and twist the Kings to his will. Galen has a soft spot or reason to keep Clay in power and he is doing everything he can to undermined Jax across the pond, making him look weak and ineffective. The Irish want to use Clay to distribute guns cutting out the club, and taking them out. They send a message to Clay, and for the first time Clay takes the info right to Jax through Gemma. Gemma however is caught in a dark place when the guards make her and Clay have sex in front of them. We all know what happens to guards who hurt anyone in SAMCRO. When Chibs learns of Jax’s plan he loses it, asking if Jax ever planned to fill in the club on all the plans he has set in motion.

While Jax is struggling to keep SAMCRO whole, Toric’s shadow is still cast over Tara and Nero. The cops are looking into Nero causing some strife with the new business parters, and a rift between Jax and Nero. Tara on the other hand is in the cross hairs of the DA, and her plans with Wendy are starting to crumble.

The episode ends with a major message from the Irish when they bomb the club house full of people. Luckily Jax and Chibs are able to save everyone, but it looks like a war is brewing.  Can Jax hold on to his position after all his back rooms deals?