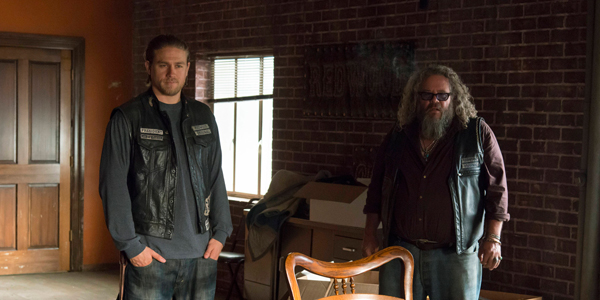 Venus returns and Tara puts her plan into action on this week’s Sons of Anarchy.

This week as the club votes in four new members they have to deal with issues from outside the club. It was a nice break from all the drama surrounding the MC over the past few weeks to deal with other issues. With Nero in jail Venus was on her own to deal with her family issues the brought her to Derosa. It turns out she has a son who is currently living with her mother. We find out that the family is in the porn business, but not the kind that Cara Cara owners would want to be involved with because of the age of the actors. Venus’s family deals with children and it is enough to get the MC involved, helping Venus get her son out of that house, and stopping the business. Though it is Venus who is quick on the trigger the whole episode, it’s Jax that ends up killing her mother with a surprise shot to the head. The crew cleans up the mess and gets Venus and son clear. The stand out in all the action is the looks and interaction between Tig and Venus. Actor Kim Coates stands out as one of the most fun and interesting characters on the show, and his screen time with Walton Goggins as Venus may go down as some of the best moments in the show’s entire run.

With her back against the wall Tara finally puts her plan into motion. At first it seems like she is going to go after Jax and the MC, but in a twist everything Tara has done was to frame Gemma. We have seen Tara for the past few weeks writing things down, planning things with Wendy, and tonight filling a bag with blood and asking Unser for a restraining order. The final piece of the whole plan for Tara is Jax’s signature on a document to make sure the boys don’t go to him or his mother, and to get him to sign it she puts the pieces into action on her final plan. Tara sends Wendy to stir things up with Gemma, sending the matriarch of the family into a rage. She confronts Tara at the hospital, and the two exchange blows. Tara then stops the fight to rams her abdomen into a desk to break the bag of blood faking a miscarriage. And just as Tara collapses on to the floor security breaks in, taking away Gemma. With all the commotion Tara gets Jax to sign the paper work to keep his mother away from the boys, and unknowingly also signs away his rights to the boys.

Will the fall out of Tara’s plan come out this season? And how with Jax and crew react when they find out Tara has turned on them?