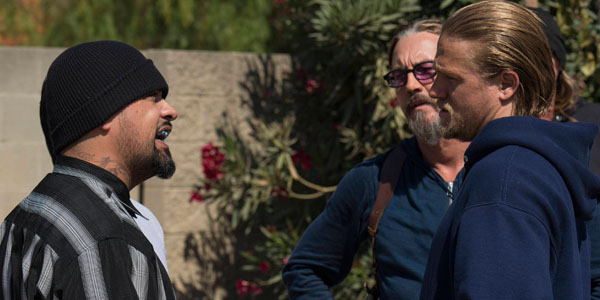 Can Jax keep the DA from taking the Club down, and can the women of Charming recover from last week’s devastating event planned by Tara?The show opens up with the women of Charming. After Tara’s plan went into effect to separate Gemma from her family, Tara rests in her own bed while Gemma cools off in a jail cell.

Tara asks Jax what he will do about Gemma. Jax lets her know he is ok with the restraining order to keep Gemma away from the boys, and he will support his wife over his mother. Once Jax leaves to go deal with the club Wayne shows up to check on Tara. The cop in him starts to question Tara about her actions; how much was planned out and how much was really Gemma. Surprised by what he finds, the supportive friend tells Tara he cannot be part of her plans anymore and it broke his heart that she did something so wrong to do what she thinks is right.

Roosevelt is looking into the incident in the Teller house, asking Gemma for her side of the story. Gemma tells him there is no point shes a dirty biker whore and Tara is the good doctor, so how can she get fair treatment. Roosevelt is surprisingly on Gemma’s side when Unser stops in to check on her. Wayne takes  Gemma home and on the ride lets her know she is not alone in all this. He tells her she has a good heart, but is surrounded by hate and she needs to let the boys go and stop trying to hold on so tightly. Gemma decides to do a little investigating of her own and  meets with Wendy and gives her the option of being on the right side, finding out that Tara was not alone in this plan.

The DA tries to set up Nero to take the blame but it backfires on her. Nero calls her back for a meeting with and takes the wrap for the KG9, saying it was all him; he bought the gun from a journeyman dealer and if she accepts the deal he wants a better life for his son. Roosevelt shows up to talk to the DA with evidence that it was Toric not Nero who killed the girl, but the DA wants him anyway.

When Jax arrives at the new club house he finds out that SAMCRO and Nero’s crew are being blamed for the school shooting right on the front page newspaper. After talking with the boys, Jax and crew meet up with Nero’s boys to calm things down. During thier meeting a car drives over one of Nero’s boys in the middle of the street dragging him down the block leaving Jax with a lot of angry Mexicans. Both crews are able to track down the guy who was driving only to find out that it was the headline that caused this incident. The reason behind the attack was a grieving father of one to the murder boys in the school shooting. The crews leave the father and when the cops show up to the house, he kills himself by stabbing himself through the neck. With two dead bodies, and no real evidence on Nero the DA has to make a hard choice. She has no choice but to release Nero, but not without showing him the dead children killed in the school shooting. Telling him to remember them every time he goes to see his own son to remember those who can’t.

Jax and Gemma run into each other at the hospital. Jax’s rage boils over and he tells Gemma she will never see her grandkids again. The show ends with Jax telling Tara he knows she is distant, and he knows its his fault and he wants her to tell him how to get back in. Can Tara let him back in? And will the DA back off after the killings? There are only 5 episodes left in the season it should be a bumpy ride.